Spartanburg’s Brad Sill won a five-way playoff to earn a spot in the Barbasol Championship on the PGA Tour.

A pink shirt may be Brad Sill’s lucky charm. The Spartanburg golfer was wearing a pink shirt when he won the Greater Greer Open and the Southern Oaks Open.

“I had a pink shirt on today too,” said the owner of Sill’s Range on the Westside of Spartanburg. “Maybe it had something to do with the way I played,” he said.

Sill wore his pink shirt and qualified for the PGA Tour’s Barbasol Open in Alabama. The former USC Upstate golfer won a two hole playoff with five other golfers to secure his first start in a PGA Tour event.

“I guess the biggest tournament I have played in before this was the US Junior so I’m pretty excited about this week,” he said.

Sill thought he had a spot in the field near the end of the 18 hole qualifier. He was tied at 5-under par with four other golfers for the four available spots into the Tour event.

“I was playing well, but I missed a short putt on the final hole and that put me into a playoff with five golfers for one spot,” said Sill.

All five players parred the first playoff hole, but on the second hole Sill hit what turned out to be the winning shot. 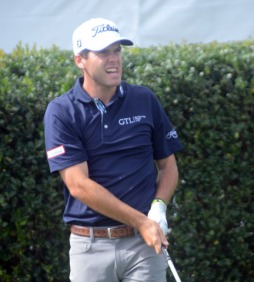 Clemson’s Ben Martin is in the field for the PGA Tour stop in Alabama.

“I hit a four-iron on a 220 yard par-3 hole and it ended up about six feet from the pin. The other guys hit good shots and got up and down, but I made the putt for a birdie,” he said.

Sill had come close to qualifying for a Web.com event earlier in the summer and has notched a couple of wins on the local mini-tour.

Now instead of competing with golfers from around the Upstate he will be in the field with Jim Furyk, Davis Love, III, and Angel Cabrera.

The PGA Tour event runs parallel to the British Open. While the best players in the world are in England for the “Major” there will be no shortage of excellent golfers in the field.

“I really don’t know any of the players since I have not been here before. I played junior golf with some of the guys, but that was a long time ago,” he said.

Bennettsville’s Tommy (Two-Gloves) Gainey will tee it up along with former Easley golfer Trace Crowe who now plays at Auburn. Crowe will compete as an amateur.

Sill will have his father on the bag and gets a pair of practice rounds on the Robert Trent Jones Trail Grand National course near Auburn and Opelika.

The Dorman grad is hoping he will be gone all week from his range in Spartanburg even if that will present a problem.

“I have to find somebody to mow the tees a couple of times,” he joked.

Sill has high expectations for his first entry into a PGA Tour event. “The sky is the limit for me. I have been playing well and I expect to keep that up,” he said.

He also may want to make sure he has enough pink shirts to get through the weekend.