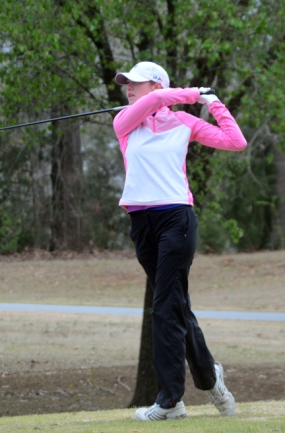 Kayla Smith from Burlington, NC won the PKB Symetra Challenge at The Links at Stoney Point.

Kayla Smith is hoping the weather in May is going to be much better for her return trip to the Links at Stoney Point.

With the win Smith earned an invitation to play in the Women’s Health Care Classic on the Symetra Tour at Stoney Point.

The weather for the first round was not great, but the second round was just awful. Temperatures in the low 40s and wind gusts helped the scores go up in the final round.

Smith and defending champion Lauren Fryvogel along with 14 year old Catie Craig from Sautee Nacoochee, Georgia battled each other and the weather for most of the second round.

Craig dropped off the pace with four bogeys on the back nine to finish in a tie for fourth.

Defending champion Lauren Fryvogel finished in second place, one shot behind the winner.

The final round used a shotgun start format. Smith and Fryvogel, playing in different groups, stayed even until the final few holes.

Fryvogel got a bad break on her final hole (#16). Her chip shot seemed to hit a ball mark on the green and left the Gibsonia, Pennsylvania golfer with a difficult par putt. She was not able to convert her putt and fell one shot behind Smith.

Playing the 18th hole Smith was convinced she needed a birdie to avoid a playoff with Fryvogel. A solid drive and a wind aided second shot left Smith with a 50 foot eagle putt.

Her approach putt stopped about 20 feet short of the cup. Her birdie putt did a horseshoe around the hole and left her with a tap in par.

“I thought I needed to make the birdie and when it lipped out I told myself I had to prepare for a playoff, but fortunately I didn’t have to,” said the winner.

The Symetra Tour Women’s Health Classic will be played at Stoney Point from May 10th to 13th.