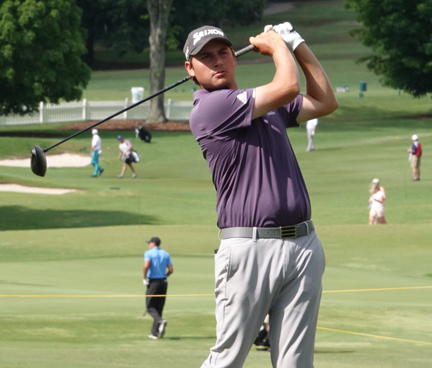 Andrew Novak finished second at the Web.com Q-School tournament played in Kannapolis, NC. at The Golf Club at Irish Creek. The Wofford grad posted a 16-under par total to finish two shots behind Vincent Whaley.

Novak will now advance to the second stage of Web.com qualifying in early November.

The 2014 SCGA Amateur champion’s best finish came at the Ellie Mae Classic at TPC Stonebrae In Hayward, Ca. Novak shot a second round 7-under par 63 to help him finish in a tie for tenth place.

USC grad Keenan Huskey and former USC Upstate golfer Brad Sill finished in a tie for 36th place after shooting 2-under par for the four-round tournament.

Clemson grad Carson Young and Furman grad Bryce Howell tied for 43rd at 1-under par for the tournament.

Golfers will attempt to advance to the Q School finals from five second stage tournaments around the country.

Five golfers with area connections will join Novak in the next round. Doc Redman, Phillip Mollica, Matt NeSmith, Wehman Hopke and Jonathan Hardee advanced from other First Stage qualifiers.