Watson Cup tees off at the Ocean Course

Interview with Ben Zeigler of the SCJGA

Interview with David Warren of the Watson Cup Scottish team

Watson Cup tees off at the Ocean Course

When golf came to America it had a Scottish accent. Almost 300 years ago the first balls and clubs arrived in the Carolinas in a shipment sent from the oldest golf club in the world.

Now centuries later junior golfers from the historic club have come to Charleston to play juniors from South Carolina in the first Watson Cup matches.

“Royal Burgess Golf Society, which is the oldest golf club in the world, in Edinburgh dating back to 1735, in 1739 golf clubs and balls were shipped from Edinburgh to Carolina and that was the start, as far as anyone can determine, of golf in the USA,” said David Warren, who is leading the team of Scottish Juniors in the Watson Cup matches.

The idea for the tournament began two years ago. While traveling in Scotland, South Carolina Junior Golf Association chairman Ben Zeigler began a conversation with junior golf leaders to put together a junior competition.

“There is a historical connection between golf in American and Scotland and especially between one club and South Carolina,” said Zeigler.

The idea received support from the South Carolina Golf Association and its counterpart in Scotland. Now the Watson Cup joins the Walker Cup and Curtis Cup among the list of competitions between USA golfers and those from the birth place of the game.

Eight golfers won a spot on the South Carolina team through their play during the year in SCJGA tournaments and the season ending All-Star championship.

“We wanted to develop a reward for the juniors who play in our events. Our tournaments are open to all juniors and playing in the Watson Cup gives them another goal for their game,” said Zeigler.

Once the competition was set it was obvious that the matches would be held in Charleston this first year and then in Edinburgh in 2020.

The Watson Cup name was chosen to honor the American golfer who had the most success playing in the Open Championship. Watson was the ‘champion golfer of the year’ five times during his Hall of Fame career.

Watson has lent more than just his name to the event. He will be at the awards ceremony to present the Watson Cup to the winning team after they play his signature Cassique course on Kiawah Island.

“The matches could have been held anywhere in South Carolina, but we wanted it to be in Charleston and to honor Tom Watson,” said Zeigler.

Just as the South Carolina team won their way into the match, so did the young golfers from Scotland.

“Our team came from the Order of Merit and League championships. We also have the junior boys champion from Scotland with us. Our team is slightly older because the boys won’t have a chance to do this again,” said Warren.

The players have been treated to banquets and received Under Armour team apparel. PGA Tour putting guru Dave Stockton gave them a group lesson as part of the event.

The trip and the matches have turned out to be as advertised.

“Iit was a bit of a fantasy to think about something like this for our boys. I’m pinching myself, to be at Kiawah. Getting a putting lesson from Dave Stockton and meeting Tom Watson, for me its exciting for the kids it must be fantastic,” said Warren. 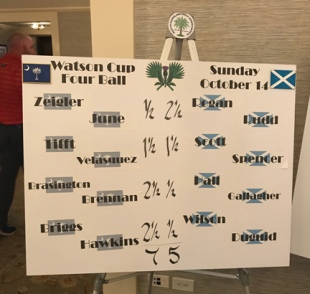 First round scores from the Watson Cup at Kiawah Island.

The first round of the Watson Cup was played Sunday on the Ocean Course at the Kiawah Island Golf Resort. The course was the site of the famous 1991 Ryder Cup  known to history as “The War on the Shore.”

The first round featured four, four ball matches. Points were earned with wins on the front, back and overall.

The South Carolina team took the lead with a 7-5 score going into the singles matches on Monday.

The teams of Daniel Brasington and Jonathan Brennan and the team of Logan Hawkins and Zander Briggs each scored 2 1/2 points to give South Carolina the lead.

The match play finals will begin at 8:am on Monday on the Cassique course at the Kiawah Island Club.