There are no awards given for either the top team or the top individual at the Upper State qualifying tournaments. A win or good showing can help build momentum for the state championships to be played next week. 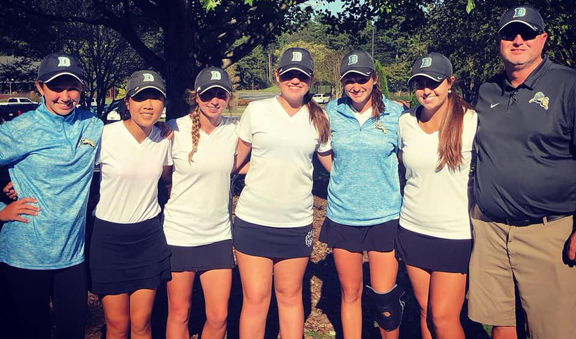 The Daniel Lions continued their domination of the Upper State AAAA clssification with their fourth straight Upper State title.

The Lions shot a 339 total to finish in front of Pickens by 11 shots. The victory sends the Lions to the state championship next week at the Hackler Course in Conway.

Kennedy McGaha from BHP was the top individual in the tournament played at The Preserve at Verdae. McGaha shot an even par round of 72 to finish four shots in front of Ashley Looper of Travelers Rest.

St. Joseph’s added the Upper State victory to their Region championship and advance to Carolina Springs next week for the state championship.

The Knights shot a team total of 351 to finish 8-shots in front of the first year team from Chesnee.

MK Talledo shot a sensational 63 to take the top spot at the AAAAA Upper State qualifying tournament played at the Waterford Golf Club in Rock Hill.

The first year Boiling Springs golfer was 9-under par to help the Bulldogs to a second place finish in the Upper State tournament.

The Bengals shot an outstanding 288 to finish 15 shots in front of the Bulldogs.

Eight teams advanced to the state finals including five teams from Region II.

The AAAAA State Championshnip will be played October 22-23rd at Mid Carolina Country Club in Prosperity.

The top ranked Lexington Wildcats will again be the favorite to repeat as AAAAA champions. (Lexington Photo)

The top ranked girls team in the state looks ready to add another state championship to the dozen they already own.

Lexington won the Lower State qualifying tournament by 20 shots over second ranked St.James. The Wildcats will try for a third straight AAAAA championship at the Mid Carolina Golf Club in Prosperity.