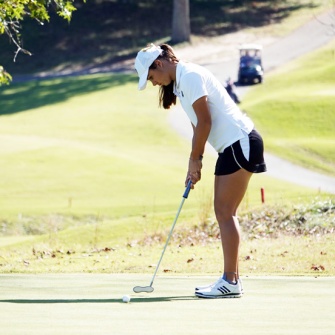 Wofford freshman Beca Earl won the Terrier Intercollegiate for the first individual win by a Wofford golfer since 2014.

The Terrier newcomer shot rounds of 71 and 73 to win the individual title in the Terrier Intercollegiate at the Country Club of Spartanburg.

The Panthers shot an opening round of 297 to hold the first round lead and a second round 313 to claim the two shot victory.

Earl, from Essex, England carded an eagle on the 16th hole to produce what turned out to be the winning margin over Madeline Davis of Samford and Ella Ofstedahl of Georgia Southern.

“I had been hitting the ball well, but I had not been scoring,” said Earl. “This week it came together for me,” she said.

Earl held a one stroke lead over Georgia Southern’s Ansley Bowman after the first round. In the final round her putting kept her on top of the leader board.

“It was important to get the ball on the right side of the hole. You want to be putting uphill on these greens and I did that today,” said the winner.

High Point won the Terrier Intercollegiate at the Country Club of Spartanburg.

Earl earned the first individual title by a Terrier since Lauren Dunbar won the Winthrop Fall Invitational in November of 2014.

“I really didn’t keep up with the other scores while I was on the course, but when I finished it was great to find out that I had won,” said the Wofford freshman.

The runner-up finish for USC Upstate continued the fine play of the team this fall. Upstate had notched two wins before the Terrier’s tournament.

“We had some chances, but these greens were so good and so fast we just were not used to them,” said Upstate coach Todd Lawton. “We had some trouble on the greens and that cost us a chance to win,” he said.

While Lawton was disappointed the Spartan’s could not find a couple of shots to pull even with High Point, the continued success of the team this fall is a point of pride for the coach. 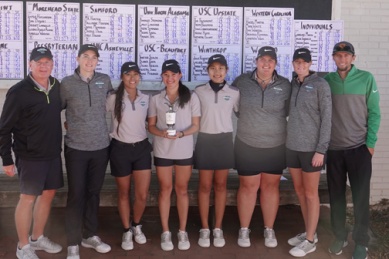 USC Upstate continued its fine play this fall adding a runner-up finish in the Wofford tournament to their two wins.

“Some years, if USC Upstate finished in the top-10 it was considered a good tournament, but this year the girls are coming into events to win. We played well in a tournament with the kind of teams we need to be competitive with for us to have a good season,” added the coach.

Brook Hutto had the best final round for the Spartans shooting a 76 to tie teammate Anna Chanthaphaeng for 17th place.

Upstate’s top finish was turned in by Pan Paksanont who earned her second top-ten of the fall with her ninth place finish.

Wofford and Upstate both completed their fall season with the tournament.