Polls don’t mean much when a season ends with a championship tournament, but this year the South Carolina Girls High School Golf poll predicted the state champions from the very start of the season.

The teams that were on top of the rankings in each of the three classifications went on to win a state championship.

Daniel’s three-year quest for a state title was reached with a convincing win in the AAAA state championship at the Hackler Course in Conway.

Lexington finished 27 shots in front of the field to win their third straight AAAAA championship in the tournament played at the Mid-Carolina Club in Prosperity.

Oceanside repeated as the AAA-AA-A champion by claiming the championship by 58 shots at Carolina Springs Golf Club in Simpsonville.

The Lions season ended in a tournament that had appeared to be out of their reach in recent years.

Daniel finished in second place last year and in the history of the program has had a number of near misses.

“Daniel has been trying to win this championship for 15 years, even before I started coaching the team,” said the Lions coach Andy Swords. “There have been a lot of golfers, in the past, who helped build the program and get us here,” he said.

However, it was this year’s team that is bringing the trophy back to Clemson.

The Lions held a four-shot lead over their upstate neighbors from Pickens after the first round. Swords was glad his team was leading the tournament, but was not happy with the way the Lions played.

“We had a little talk when we left the course to make sure everyone knew they needed to play better in the final round. Pickens is a good team and they put some pressure on us,” said the Daniel coach.

Playing in the same groups the Daniel and Pickens golfers were in a head to head competition for the championship.

“We played the final round as if everything was even,” said Gillian O’Brien. “We had to go out and beat the girl we were playing. If we could do that we could win the championship,” said the Daniel senior.

In each of the five pairings the Daniel girls accomplished their goal. Each player finished ahead of their playing competitor, but some of the match ups were difficult.

“I got five shots down after five holes and took a depth breath,” said Emileigh Swords. “I picked myself up and had a strong finish to end up in front,” said the six-year member of the team.

The Daniel coach knew the final round was not going to be close when the Lions third player, Adrienne O’Brien, turned in a final round 78.

“She improved by 11 shots from her first round and when I saw that score I knew our first two golfers were playing well and we were going to finally win a championship,” said Swords.

The Lions improved by 14 shots from their first round total to finish at 654. They also increased their lead over Pickens from four shots to a convincing 38 shots.

Gillian O’Brien finished in fifth place and Swords followed her in sixth on the final leader board. Both golfers made the AAAA All-State team.

Courtney Collins, Jennifer Gao and Peyton O’ Brien each contributed to the championship.

“Everyone stepped up their game today. We have all worked so hard to get here and I love all my teammates and what we accomplished this year,” said O’Brien.

“We knew if we put two good rounds together we could win this year and we did. As a senior this is a great way to finish up,” said Emileigh Swords.

Emma Charles from Hartsville was the AAAA medalist. Charles shot rounds of 71-75 for a 146 total to edge Travelers Rest’s Ashley Looper by one shot. Kennedy McGaha from Belton – Honea Path was third with a 148 total. 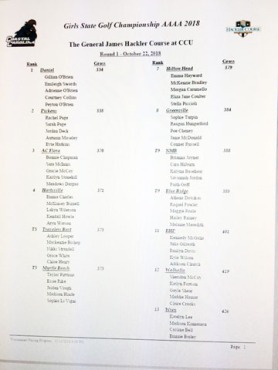 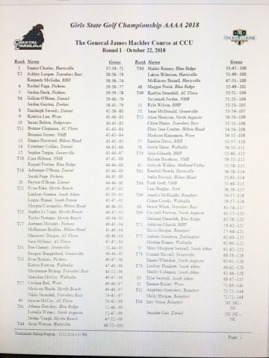 The Lexington Wildcats won their third straight state AAAAA title. With a lineup that featured two sophomores and three freshmen the Wildcats look to be the team to beat for the next few years too.

“We are not going to run out of golfers any time soon,” said Lexington coach Brandon Smith. The Wildcats have won 13 state championships in the last 15 years.

“I expected it to be closer after I saw some of the Upper State scores. We just wanted to play our best and not worry about the competition,” said the Wildcats coach.

Lexington shot an opening round 313 and improved by 13 shots in the second round to pull even further away from second place Blythewood.

“We really played well on the back nine. We have very good players and they played well,” he said.

Isabella Rawl was the AAAAA medalist shooting a 36 hole total of 148.

Defending champion Elle Johnson from Spartanburg had the first round individual lead, but she fell off the pace in the second round and a pair of Lexington golfers were ready to take over the top spot.

Isabella Rawl and Karlee Vardas each posted final round scores of 2-under par 70 to move past Johnson and finish first and second respectively.

“We were a little worried when we saw the Upstate scores and we knew we had to play solid golf,” said Rawl. “I had a rough summer and winning this with my teammates is amazing,” said the AAAAA champion, who as a freshman has already made a commitment to play college golf at Clemson.

Rawl finished with a two-day total of 144 followed by Vardas at 148. Adrian Anderson of St James was third while a third Lexington golfer, Molly Hardwick, finished in a fourth place tie with the defending champion Johnson.

The Boiling Springs finish was remarkable considering the Bulldogs had to rebuild their team shortly before the season began.

Three members of the Boiling Springs team that finished as the runner-up to Lexington last year were not on this year’s team.

The three golfers, who attend Chesnee High School in the same school district as Boiling Springs, were allowed to play on the Bulldogs team in the past because Chesnee did not have a girls’ golf team.

This year the AAAAA classification schools did not grant a waiver to continue to allow the Chesnee students to play for Boiling Springs, leaving the Bulldogs with a much different team than expected.

“I’m really proud of how our team handled every thing this year,” said Boiling Springs coach Shannon Turner. “They fought for every shot in this tournament and we finished in the top three. We lose two great seniors but we have some good JV players coming along,” she said.

The Bulldog’s MK Talledo, who was the top finisher in the Upper State qualifying tournament after shooting a 63, finished in a tie for sixth place with Emily Dunlap from Mauldin and Mia Gray from Carolina Forest.

The Mount Pleasant school dominated the tournament winning the title by 58 shots over Bishop England.

St.Joseph’s from Greenville was third with Gilbert in fourth and May River in fifth place.

The first year golf team from Chesnee tied with Chapman for sixth place.

Jensen Castle from Gray Collegiate’s Academy was the AAA medalist shooting rounds of 68 and 69 to finish at 7-under par 137. This was the second state championship for Castle. She had previously won the 2016 individual AAAAA championship.

Anna Grace Brock from Emerald was second after shooting rounds of 78 and 69 for a 146 total.

Kennedy Gooding from Gilbert, Sydney Roberts from Chesnee and Jalen Castle from Grays all tied for third place.

In addition to the top five golfers also earning All-State recognition were Rich, Kayla Bartemeyer and  Martinez from Oceanside, Kennedy Carrol from Bishop England and Peyton Gillespie from Christ Church. 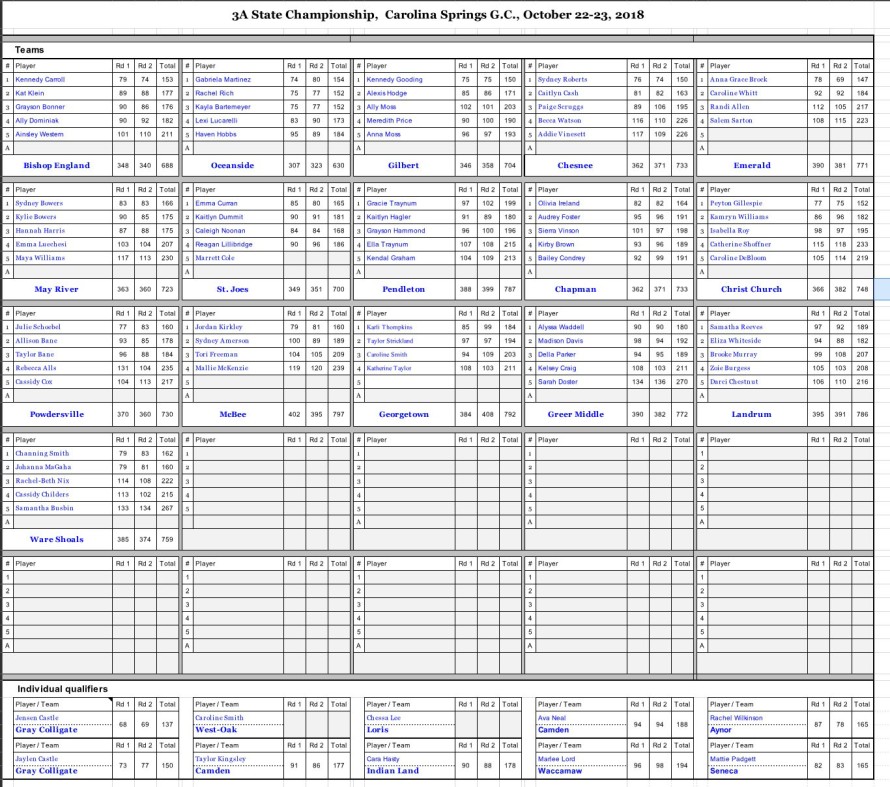