Giving back to the game

If the weather holds off this weekend the Morgan Lucas Championship will be played at the Greenville Country Club. The field includes 84 of the top junior players in South Carolina.

Many of the young golfers have already signed on to play college golf and many of the others will have that same opportunity in the next few years.

Learning to play the game is only half of the knowledge needed to make the move from successful junior golfer to college and maybe even to a professional tour.

The night before the start of the tournament three golfers who made the jump from the junior ranks to college and then on to the pros talked with the young golfers to help them understand advancing in the game isn’t just about hitting a 300 yard drive.

Charles Warren won a NCAA Individual championship, was a three time All-American and a two-time ACC Champion from Clemson.

Former PGA Tour professional Charles Warren and current Tour pros William McGirt and Ben Martin offered some advice and inside information to the juniors who were sitting were they were just a few years ago.

“I don’t remember any pros doing this kind of thing for us when we were juniors,” said McGirt. “It is something that always stuck with us. We are all into doing something for junior golf and this is just a small thing we can do to give back,” he said.

William McGirt won his first PGA Tour event with a victory at The Memorial.

The young golfers asked the expected questions about favorite courses, best shots and is Tiger Woods the best golfer of all time, but there were also many questions about the opportunity to make golf a career.

Warren, an NCAA individual champion and three time All-American won twice on the Web.com Tour. The two-time ACC champion from Clemson made sure the young players knew how important it is to be dedicated to the process of developing their game and having fun along the way.

“If I know that I worked as hard as I could and did the best I could then I was successful,” said Warren,” who played Tour golf for 15 years. “It is the commitment you have to make to the process to reach your goal,” he said.

Martin, who was not the top player on his high school team and had to red shirt his first year at Clemson, suggested that getting a little better every year is a goal every player should set for themselves.

“Every year I play, if I can look back and say I got a little better than I am moving in the right direction,” said Martin.

The professionals also emphasized the importance of a great attitude not only on the course, but also off the course.

“College coaches look at how you behave on the course and off. Nobody cares how good you can play if you are always in trouble, or dragging down the team,” he said.

Martin passed along a lesson he learned from his swing instructor, Billy Delk that everyone should learn.

“He taught me that you have got to trust and believe in yourself. Confidence is important in golf and it’s something you can’t fake,” said Martin.

All three golfers also had some advice for parents of junior golfers.

“Parents need to keep things in perspective. My dad coached me to work hard and do things the right way, but he never forced me to play, he just gave me the opportunity,” said Martin.

Some of the young golfers have already had a great deal of success. McGirt reminded everyone that there is a place in the game for late bloomers. His path to the PGA Tour included many years playing mini-tour golf to earn his way to the big tour as a 31 year old rookie.

“I think the guys who had to work their way up from the mini-tours appreciate the opportunity to play on Tour a little more than those who get on Tour right out of college. When you have to fight your way out there, it is something that stays with you through your career,” he noted. 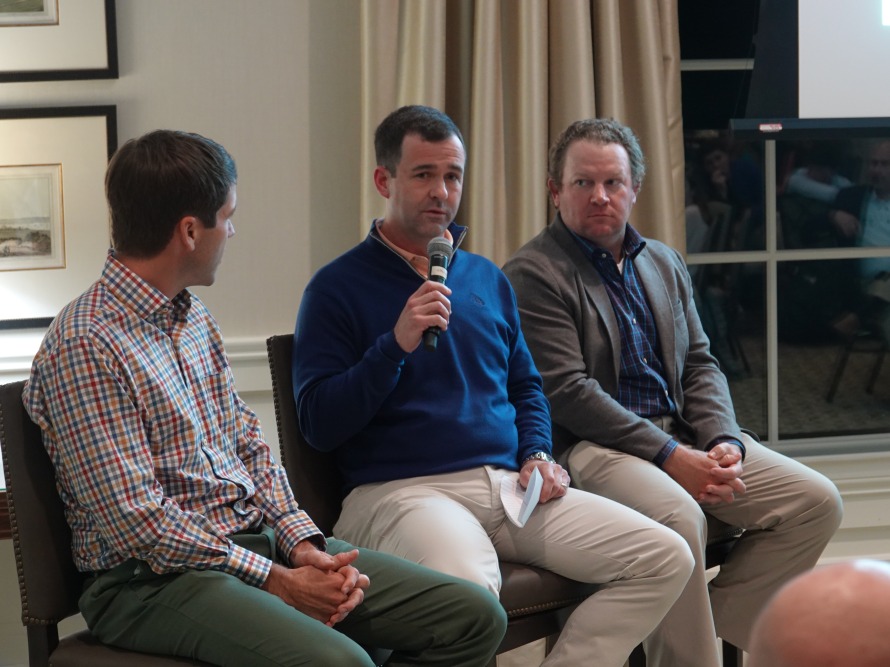 Ben Martin, Charles Warren and William McGirt spoke to the golfers playing in the Morgan-Lucas tournament at the Greenville Country Club.

Warren, Martin and McGirt each reached their goal of playing professionally while only playing state events. The three never played any AJGA tournaments.

“My memories from junior golf are playing at Thornblade, Cheraw and the state junior. The SCJGA does a great job and creates the opportunities for juniors to become successful,” concluded Martin.

The Morgan-Lucas Tournament is scheduled for Saturday and Sunday. Boys and girls champions will be crowned at the event being played at Greenville’s Chanticleer course.