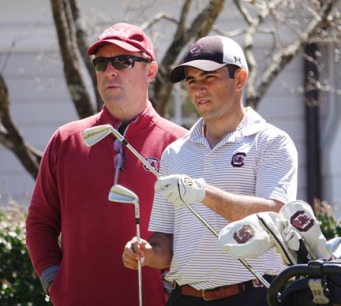 The NCAA announced the full field for the 2019 post season and the Palmetto State is well represented in regional tournaments.

The 11th ranked Gamecocks are the highest ranked team from the state and they will travel the farthest to compete in the tournament. South Carolina has been sent to the Regional in Pullman, Washington.

This will be the 12th NCAA regional appearance in the past 13 seasons under Gamecock golf coach Bill McDonald.

The Clemson Tigers will travel to Austin, Texas to start their NCAA tournament play. The 21st ranked Tigers are seeded fourth in the region hosted by 7th ranked Texas and played at the University of Texas Golf Club in Austin.

Southern Cal and Pepperdine are seeded above the Tigers in the regional.

This is the 38th straight year the Tigers will be in post season play. Clemson has advanced to the NCAA Finals each of the last four years.

Three individuals form the area have been invited to compete in the post season tournament.

Furman’s Keller Harper received an invitation to compete in the Athens Regional.

Southern Conference Player of the Year Keller Harper from Furman and USC Upstate junior Jordan Warnock have been assigned to play in the Athens, Georgia regional as individuals.

Harper became the first Paladin golfer to receive an individual invitation to the NCAA tournament in 14 years.

“Keller is very deserving of this opportunity,” said Furman golf coach Matt Davidson. “He had an exceptional season so far and will be ready to compete in Athens, the course if very familiar for both of us and is a solid test. It should fit hum nicely,” noted the Furman coach.

USC Upstate golfer Jordan Warnock has been selected to play in the NCAA Post-season. He is the second Upstate golfer to play post season golf since the school moved to Division I.

Warnock is the second USC Upstate golfer to play in the NCAA Division I post season. The former Dorman golfer earned All-Big South honors this past season.

“I was heartbroken when our tam lost the chance to go, but at the end of the day this is just awesome,” he said. “Now it is time to get back to work and try to make the nationals,” Warnock added.

Georgia hosts the regional on their course and that means Bulldog golfers Trevor and Trent Phillips from Boiling Springs will also be involved in post season play.

Clemson senior Bryson Nimmer and his Tiger teammates will compete in Texas for the second straight year. This year they will play in the Austin Regional.

College of Charleston golfer Logan Sowell also earned an individual invitation to the tournament and he will join Harper and Warnock in Athens.

Myrtle Beach will host a NCAA Regional and Wake Forest is the top seed. Coastal Carolina golfer Zack Taylor will be in the field at the TPC Myrtle Beach.

Play begins at the six regional sites on May 13.

The top teams from each regional will compete in the national final to be played at The Blessings in Fayetteville, Arkansas starting on May 24th.