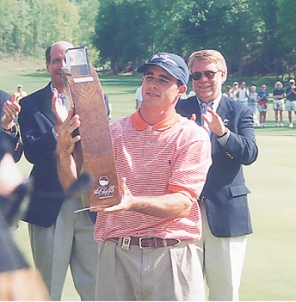 The golf is almost always amazing and the celebrities are fun to watch, but most year’s Upstate golf fans don’t know much about the competitors they are watching at the BMW Charity Pro-Am presented by Synnex.

This year is different. Sure Brett Favre, Larry the Cable Guy, Anthony Anderson and Shep Rose will be fun to watch, but so will almost a dozen players with ties to the Palmetto State.

Instead of reaching for their phone to look at the PGA Tour website and find out who some of these guys are, local golf fans will know them because many of them grew up playing right here.

Three golfers from the state have won the BMW title. The first win was recorded by Clemson grad Jonathan Byrd. Byrd won the title in 2000.

The victory in his first year on Tour helped him make the jump to the PGA Tour. Byrd was the Rookie of the Year the following year and went on to win seven PGA Tour event championships.

Kyle Thompson first played in what is now the BMW Tournament while still in High School. Thompson made the cut in 1997. (GolfClub Photo)

His win was followed by another Clemson golfer winning a year later. Charles Warren won the 2001 championship. Warren won two-more championships before retiring from the Tour in 2011.

Mark Anderson is the third Palmetto State golfer to win in Greenville. The USC grad from Bluffton and former SCGA Amateur champion won the BMW in 2013. He set the tournament scoring record that stood until Micheal Arnaud broke it with his win last year. (Arnaud is back to defend his title)

Anderson comes into the BMW ranked 5th on the Web.Com season points race with an early season win on his 2019 resume. A top-25 finish at the end of the season would get Anderson back on the PGA Tour.

Three other golfers with time at USC are in the lineup. Kyle Thompson first played in the Nike Upstate Classic in 1997 as a high school golfer. He made the cut.

As a pro he has a handful of top-ten finishes in the BMW event including a 2nd place finish in 2003. He earned five Web.com wins before giving up full time status on the Tour to enter private business in the Upstate.

Brett Quigley attended USC before turning pro in 1991. He has a pair of wins on the Web.com Tour predecessors. At 49 Quigley is close to the right age to attempt to make the Champions Tour later this year.

Matt NeSmith was the 2015 SEC Individual champion while at USC. The Gamecock grad from North Augusta has a pair of top-ten finishes this year and is ranked 49th on the Web.com points list.

Keenan Huskey from Greenville is the most recent USC grad to be in the field. Huskey played in the Mackenzie Tour event last week and cashed a check. Besides getting 4 college wins Huskey won the SCGA Amateur in 2015 at Chanticleer.

Andrew Novak was the SoCon Player of the Year and an SCGA Amateur champion. The Wofford grad has 3 top-twenty finishes this year and is 39th on the Web.com points list.

The most recent ACC Player of the Year Bryson Nimmer made his professional debut last week in British Columbia. The recent Clemson grad finished in a tie for 14th after shooting a final 65.

Nimmer played in the PGA Tour event in Puerto Rico as an amateur earlier this year. This will be his first start on the Web.com Tour.

Ben Martin has a PGA Tour championship on his resume, but he has been working through an injury and will play in Greenville. (GolfClub Photo)_

Greenwood’s Ben Martin continues to recover from an injury that has sidelined him from his spot on the PGA Tour. Martin has one PGA Tour win on his resume and will be in the starting field at the BMW as he continues to work his way back to the big tour.

Billy Kennerly is a 2015 Clemson grad. He has two-top 10s so far this year and is ranked 40th on the WEB.com points list.

Hartsville resident Tommy “Two Gloves” Gainey finished as the runner-up in the 2010 BMW. He has a PGA Tour win and two Web.com Tour victories.

Gainey gained a nickname from the fact that he wears two golf gloves. He won a version of the Golf Channel’s Big Break earlier in his career.

Josh Gallman from Gaffney is recognized as the best golfer to come from USC Upstate. The Upstate grad has not held regular status on a PGA Tour, but local golfers in the Upstate have seen his name on several courses as the course record holder.

Winning a pair of Heritage titles, even if you didn’t grow up in the state will make you a local favorite

Boo Weekly has won two Heritage Classics. He will be in the field for the BMW tournament.

So in between getting an autograph from Brett, Willie or Shep golf fans will have no shortage of local players to cheer on this week.