State Am suspended by bad weather 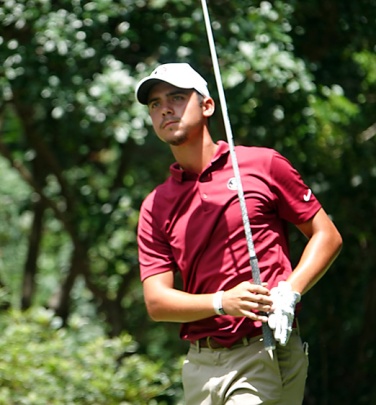 FSU golfer Jake Carter from Aiken has the lead at the SC Amateur. Carter was among the half of the field to complete his round before weather suspended play for the day. (GolfClub File Photo)

Maybe it isn’t a weather system from the coast, maybe Thornblade is causing the rain.  In June the BMW Charity tournament was hampered by rain.

The Blade Junior Classic usually played at Thornblade was played this year at Green Valley Country Club, but moving the location didn’t fool the weather.

The final round of that tournament was rained out too.

On Thursday the first round of the South Carolina Golf Association Amateur Championship met the same fate.

Golfers could not complete the round because of rain and bad weather at the course.

A little less than half of the 144 player field was able to complete their first round while a handful of players never got started because of their late in the day tee times.

Of the golfers who were able to finish the first round, Jake Carter from Aiken shot a 7-under par 64. Carter has a two shot lead with half the field yet to post a score.

Last year the Florida State golfer also held the first round lead after shooting an identical 64 at the Dataw Island Club.  Carter would finish the 2018 Amateur in third place behind champion William Harwood of Columbia.

Bobby Few from Lugoff, Judson Holiday from Aynor and former Greenville County Amateur champion Danny Brock are all tied at 5-under par 66.

Play was suspended just before 4 pm on Thursday

Players will pick up where they left off at 8 am on Friday with the second round scheduled to begin at 11 am.

Live scoring is available at https://www.golfgenius.com/pages/1923757