Gray puts the pedal down to win the SC Am

Tyler Gray won the 2019 SCGA Amateur at Thornblade Club. Hear from the new state champion about his victory.

Tyler Gray took the lead in the second round and never gave it up to win the 88th SCGA Amateur played at Thornblade Club.

Dumb luck can strike at any time. Either good or bad, the rub of the green can make a difference in the outcome of a championship.

After working through rain delays  and earning a one-shot lead after all the second round scores were posted, Gray holed what he called a “kind of lucky chip in” early in his third round.

“It gave me a shot I shouldn’t have had and I really needed it,” said the rising sophomore at Coastal Carolina.

The eagle put Gray two shots in front of the field. He finished his third round with only one bogey and posted a 4-under par 67 for a three day total of 13-under par.

Just as they did during the BMW rain plagued event, the Thornblade grounds crew kept the course in excellent playing condition.

Neither of the first two rounds could be completed as scheduled because of rain.

After over 5 inches of rain in the first two days of the championship, the course yielded red numbers in bunches on Saturday.

Clemson golfer Colby Patton tied for the low round of the tournament when he carded a 6-under par 65 in the third round. (GolfClub Photo)

In all 30 of the 71 players who made the cut shot under par as the field benefited from the wet conditions that allowed golfers to lift, clean and place their ball in the fairway.

Starting the final round Gray was two-shots in front of Logan Sowell from Kershaw.

In the final round Gray added to his lead with a pair of birdies in the first three holes.

His closest competitors were not able to put any heat on the leader, instead it was a Mid-Am from Clemson that was closing the gap.

Raymond Wooten started the final round 4 shots back. He would close to two shots hoping to rattle  the leader.

“I thought I might be able to put some pressure on him, but he kept playing well,” said Wooten, who finished the championship at 10-under par in a tie for fourth place.

When Gray birdied numbers 12 and 13, the rest of the field was playing for second place.

“I knew there were a couple of guys within two or three shots of me. I knew I had to keep the pedal down. I was never in panic mode and called on past experience to do the job,” he said.

Gray added another birdie on the 15th hole and then played it safe the rest of the way carding three straight pars.

Mid-Am Raymond Wooten got within two shots of Gray in the final round, but had to settle for fourth place tie. (GolfClub Photo)

The champion played the final round with a laser sharp focus on each shot.

As a junior golfer, Gray won two SCISA state championships and was the Player of the Year for the independent schools’ association.

In major competitions Gray earned a number of top-10 finishes, but was unable to break through for a victory making his state championship even more satisfying.

“I’ve tried hard to win one of these golf tournaments since I was 14 and now to do it in a state amateur means so much to me,” he said.

Gray’s confidence in the state amateur grew in each round and he relied on that confidence to secure the victory.

“I finally have 100% confidence in my golf game. I know my game well. I don’t get myself into bad situations and I know what is the right thing to do in the right situations,” he said.

As a freshman at Coastal Carolina, Gray saw limited action. Now with a state amateur title on his resume, he will have something to celebrate when he returns to Conway this fall.

“When I get back to school there will be a big celebration. I can promise you that,” he concluded.

The battle for the second spot came down to the final hole. 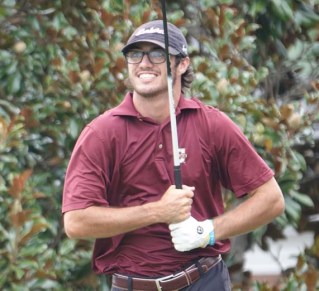 College of Charleston golfer Logan Sowell made a 50 footer from just off the green on the final hole to claim second place. (GolfClub Photo)

College of Charleston golfer Logan Sowell made a 50 footer from just off the green to birdie the final hole and claim second place.

Salzer bogeyed the final hole to drop into a tie for fourth with Wooten and 2019 Spartanburg County amateur champion Matt Carter.

Jake Carter shot a final round 70 to finish in third place, just as he did in the 2018 championship at the Dataw Island Club.

Clemson golfer Colby Patton followed up his third round 65 with a final round 69 to finish at 9-under par and claim seventh place.

2018 SCGA Player of the Year Robert Lutomski from Simpsonville shot all four rounds at par or better to finish in a tie for ninth place.

1990 SCGA Amateur champion Todd White of Spartanburg, at age 51, finished at 7-under par to tie Lutomski and USC golfer Jaimie Wilson for the ninth spot.

The top-20 and ties will be exempt into next year’s amateur.

Golfers needed to shoot 4 over par or better to make the cut. Competitors needed to post a 4-under total for the  championship to automatically qualify for a place in the field next year.

The 2020 SCGA Amateur will be played at the Columbia Country Club.

Complete scoring is available at https://www.golfgenius.com/pages/1923757