Hear from Brent Delahoussaye and Stephen Poole and see the putt that won the 2019 Chanticleer National Four-Ball championship.

Poole and Delahoussaye win at Chanticleer

The first tee at the Greenville Country Club’s Chanticleer course looked like a driving range as four two-man teams began a playoff for the championship at the 2019 Chanticleer National Four-Ball Invitational.

The teams had all finished the 36 hole event at 9-under par to force the playoff.

Brent Delahoussaye and Stephen Poole along with Walt and Neal Todd had opened the championship shooting 6-under par rounds of 66.

On a very tight and deep leaderboard the team of Blair and Brian Scurlock shot a 67 to hold third place.

Stephen Poole made an 8-foot birdie putt to win a four-team playoff and the championship at the Chanticleer National Four Ball. (GolfClub Photo)

Four other teams including the duo of Cole Patterson and Sam Jackson carded 4-under par 68s to start the final round just two shots off the lead.

None of the six teams in contention for the victory were able to pull away from the field. As the second round neared completion four teams got to 9-under par, three more groups stood at 8-under par.

Only the team of Blair and Brian Scurlock was able to gain a one stroke advantage on the field.

Birdies on number 15 and the par-5 17th hole got the team to 10-under par with only the final hole left to play.

The par-4 18th at Chanticleer has often proved to be the deciding hole in the Four-Ball championship and the Senior Invitational held on the course in the spring. It was again this year. 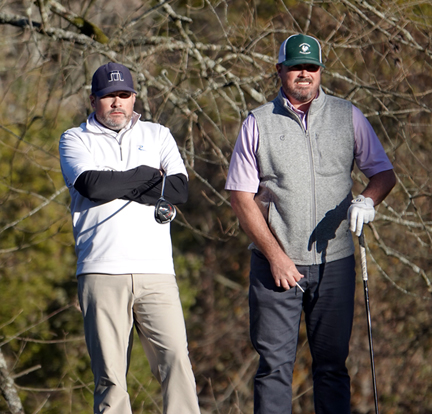 Blair and Brian Scurlock held the lead until the final hole. (GolfClub Photo)

The Scurlock’s lost their one shot lead with a bogey on the finishing hole and when the two teams behind them could not birdie the hole a four-way playoff was set.

All four teams teed off together. While five of the eight golfers found the green with their second shots Poole had the best chance for a birdie.

Jackson’s 40 foot putt rolled within a few inches of the hole. Scurlock’s putt from almost the same distance missed the cup and Patterson’s 30 footer rolled across the edge of the hole.

After watching three near-misses Poole lined up his eight footer for the win.

With a little advice from Delahoussaye Poole drained the birdie putt for the win.

The two former Clemson golf teammates had played together in a national four-ball qualifier a few years ago and thought it would be fun to team-up at Chanticleer.

“We didn’t have any expectations,” said Poole. “Neither one of us have played much and we thought we might shoot one or two over actually,” he said.

Instead the former Tiger golfers opened with a 66 and followed up the 6-under par with a 3-under par 69.

Brent Delahoussaye teamed up with Poole to shoot an opening round 6-under par 66. (GolfClub Photo)

“We finished off well yesterday, but I didn’t do much to help today,” said Delahoussaye. “Stephan hit it in there for us pretty much the whole day,” he said.

When Poole and Delahoussaye parred the final hole they thought they had finished one shot out of the lead. Only when they handed in their cards did they find out they were in a very large playoff.

“Eight tee balls is a lot of golf balls to have out there at one time,” said Poole. “We had to dodge a few bullets. A couple of the putts hit the lip.” said Poole.

Poole’s putt was in the center of the cup and gave the two former college teammates a win.

“It has been a long time since we won anything,” the two laughed. “We look forward to coming back to defend next year,” said both winners.

The teams of Paterson and Jackson, the Scurlocks and the Todds finished tied for second.

The team of Stan Gann and Keith Guest shot a 6-under par 66 for the best final round and finished in a tie for fifth place with Jordan Sease and Kyle Beardon.