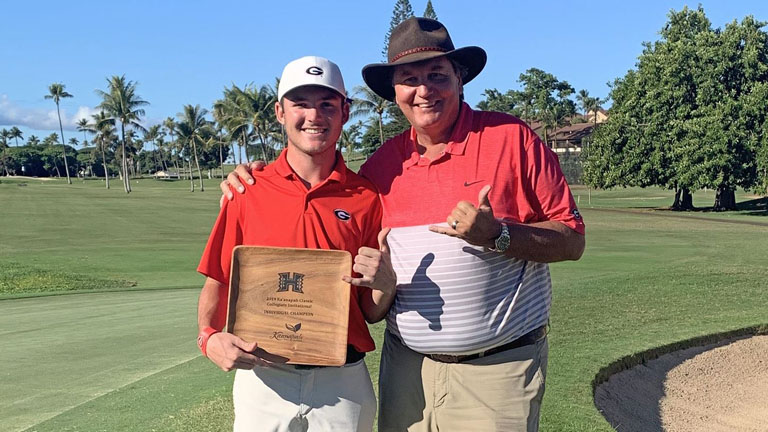 Georgia golfer Trent Phillips from Boiling Springs won his first college tournament in Hawaii. The three-time SCGA Junior Player of the year needed seven extra holes to get the victory in the Ka’anapali Collegiate Classic.

Phillips started the final round with a two shot lead over Quade Cummins from Oklahoma. However, the Sooner’s golfer got off to an incredible start as he birdied his first seven holes.

Cummins added a birdie on the ninth hole to make the turn at 29.

The final round used a shotgun start and Phillips began his round on the seventh hole. The Bulldog sophomore made three birdies on his first nine holes to make the turn at 32 and trail Cummins by 1 shot.

The Oklahoma golfer made one birdie and no bogeys in his final nine holes to finish at 9-under par.

Phillips made five more birdies without a bogey on his final nine holes to finish even with Cummins and force a playoff.

It took seven holes before Phillips was able to roll in a birdie putt to claim his first college victory.

On his way to the win, Phillips who is on the Haskins Award watch list for the second straight year, set a new Georgia 54 hole scoring record with his 20-under par total.

His winning performance in Hawaii topped the existing school record of 18-under par set by Chris Kirk in 2007.

In just his first year and a half at Georgia, Phillips has one college victory, a second place finish and four third place finishes on his record. 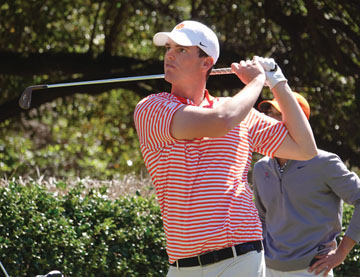 Clemson’s Zach Gordon from Gaffney shot 3 rounds in the 60s to finish in a tie for fourth. (GolfClub photo)

Phillips record setting performance helped his team move up five spots in the final standings to finish the tournament in fourth place.

South Carolina golfer Ryan Hall shot a final round 66 to move up to third place and help the Gamecocks to a 5th place finish at 32-under par.

Clemson sophomore Zach Gordon from Gaffney shot his third round in the 60s to finish at 12-under par 211. Gordon claimed a tie for fourth place.

While Gordon finished as the top Tiger in the tournament his score did not help the Clemson team since he was playing as an individual entrant.

Turk Pettit and Kyle Cottam posted the best score for the Tigers and helped Clemson move into the top-10 and finish in ninth place.

Scoring is available at http://www.golfstat.com