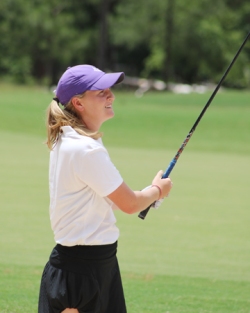 Lady Paladin golfer Anna Morgan took over sole possession of the lead at the WSCGA Amateur after the second round. (CGA Photo)

Another under par round has earned Anna Morgan the lead after 36 holes at the Women’s South Carolina Golf Association’s Amateur.

The rising sophomore at Furman carded a 2-under par 70 at the Columbia Country Club to break out of first round tie and be alone on the top of the leader board.

USC golfer Smith Knaffle also shot a 70 to move up to fourth, one shot behind Savannah Hilton from Hilton Head, who was 1-under par in the second round and is now in third place.

Morgan put 5-birdies on her scorecard while Hardwick moved up one spot with three birdies in the second round.

First round co-leader Clemson golfer Gracyn Burgess dropped out of the lead after  going 5-over par on the front nine. Burgess finished the second round in a tie for eighth place. 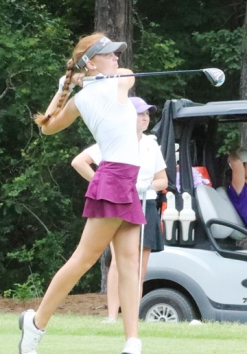 Junior golfer Molly Hardwick from Lexington shot a 2-under par 70 to move up to second place. (WSCGA Photo)

Kerry Rutan from Yeamens Hall Club shot a 73 to move up to second place. The 1-over par round was the best score so far in the Division.

Nancy Dodge from the Mid-Carolina Golf Club posted a 76 to take over the top spot in the Super-Senior Division from Three Pines golfer Stephanie Van Inwagon.

The tournament leaders will tee off in the final round at 11 am.