Fountain keeps the lead at the Carolinas Amateur 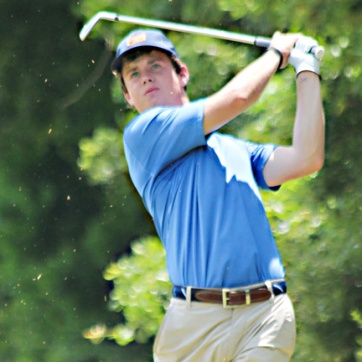 Incoming UNC freshman golfer Peter Fountain holds a 1-shot lead going into the final round of the Carolinas Amateur at the Cape Fear Country Club in Wilmington. (CGA Media Photo)

Peter Fountain shot his second straight 4-under par round of 68 to keep the lead at the Carolinas Amateur.

The incoming UNC golfer has a 1-shot advantage at the top of a tight leader board going into the final round at the Cape Fear Country Club in Wilmington.

Fountain must have felt like he was riding a roller-coaster in the third round.

Two early birdies and an eagle was followed by three bogeys in five holes before the Raleigh golfer was able to finish with three birdies in his last four holes to keep the lead.

“It’s definitely big when you go on a stretch where you make three bogeys to be able to finish with three birdies,” Fountain said. “It gives you a lot of confidence rather than getting down on yourself and not having momentum going into the last day,” he said.

Wofford golfer Walker Jones posted the best round of the day finishing with a 6-under par 66 to earn a spot in the final group with Fountain. 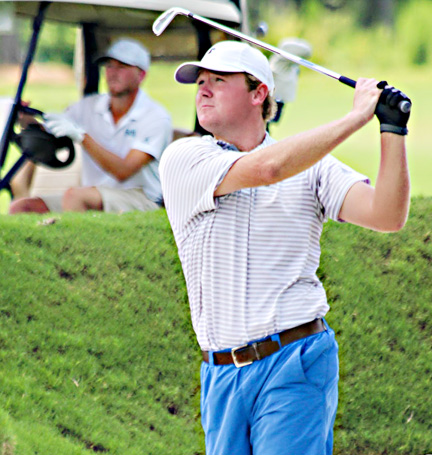 Wofford golfer Waker Jones is one shot off the lead after three rounds of the Carolinas Amateur. (CGA Media Photo)

“I felt super committed to all of my shots today,” Jones said. “I felt comfortable and really settled into my round. Out here, I think it’s really important not to try and force anything and fire at the pins with the greens being as firm as they are. I just stayed patient and let the round come to me,” he said.

The third member of the final group on Sunday was the first round leader. Lansdon Robbins shot a third round 4-under par 68 to enter the final round two shots behind Fountain.

Davis Womble from Winston-Salem is alone in fourth place three shots off the lead.

The 2019 SCGA Player of the Year Jordan Sease from Lexington is tied with Blake Taylor from Atkinson, NC for fifth place.

Greenville’s Rafe Reynolds is tied for seventh place with Symon Balbin from Pinehurst.

Golfers continued to put red numbers on the scoreboard as 36 of the remaining 49 competitors are at even par or better.

Fountain will call on the experience he has gained in his recent wins to help him claim another major Carolinas championship.

The leaders tee off at 10:10 on Sunday. The CGA provides live scoring on their website along with third round scores at https://www.golfgenius.com/pages/2568361

The CGA contributed to this report.