Austin Ernst had a great second round at the Walmart NW Arkansas Championship. The LPGA Tour player from Seneca carded a 6-under par 65 to move into a 3-way tie for third.

In a media session after the round Ernst offered what she thought could be the key to earning her second LPGA Tour victory.

And the next day she went out and did it, well almost every hole.

Ernst carded 10 birdies to come from 4-shots off the lead to win the tournament by 2-shots.

The win came after a strong performance and fifth place finish in Scotland at the AIG Women’s Open gave her confidence a boost for the Arkansas tournament.

“Playing well last week really helped.  I knew I needed a really low score. I kind of thought at the beginning of the week that 20-under would win and I think that’s what I got to, so I guess I was right on that one,” she recalled.

Ernst also recalled telling the media, the day before, that she was going to attack the course and go for a birdie on every hole.

“Out here you needed to attack and you couldn’t be afraid and couldn’t just kind of middle-the-green it all day. I didn’t officially know where I stood, but I assumed I got the lead pretty early on in the back nine, and I just knew I needed to attack and make a lot of birdies coming in,” she said.

Ernst took the lead on #12, bogeyed #13 to drop back into a tie with Nordqvist and then took the lead for good with a birdie on #14.

She played the last four holes the same as the first 14. Ernst never backed off. Never took her foot off the gas.

“I just wanted to keep making as many birdies as possible. I was kind of just playing like I was behind the whole time. Even if I had the lead, okay, they have one more hole. I could not make enough birdies today, she said.

Playing one group in front of Nordqvist, Ernst finished with a birdie on #18 for her 8-under par round of 63 and what ended up being a two shot victory.

“I think just having that confidence from the last four weeks and knowing my game was trending in the right direction, and then shooting 65 the first day just kind of solidified it. I always knew that I could win more than one, to actually do it means a lot,” she said.

In 2014 Ernst won her first tournament in a playoff.

Between the time she finished her round and the playoff began she got a tip from her Dad who was watching on TV back in Seneca.

Mark Ernst is the head PGA Professional at Cross Creek Plantation. He is also Austin’s coach. He noticed something while watching the broadcast, offered some coaching and Ernst went on to the playoff victory.

After watching her putt on TV last week, from Scotland, she got another tip form Dad that made a difference in Arkansas.

“He noticed that I was a little bit more upright and my hands were a little behind the ball last week. So the quick adjustment this week was, okay, feel like your hands are just forward of the ball and bend from the waist just slightly more. So that little adjustment seemed like the ball started on line more and the contact was more consistent. Even though I haven’t had a check-in with my dad in a long time he could notice that,” she said.

The victory ended a streak of 143 tournaments without a win. Ernst had not won since her second year on Tour at the Cambia Portland Classic.

With the exception of last year, the former LSU golfer was often in contention during her eight years on Tour, but in 2019 she recorded only one top-10 finish.

Ernst made the most of the six month break caused by the pandemic to revitalize her game.

Now with a win and a top-5 finish Ernst’s game is back pointing in the right direction. 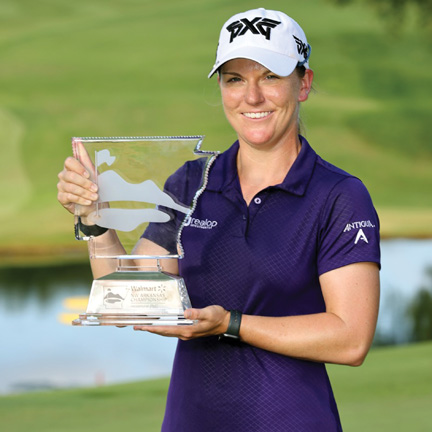 Ernest victory in Arkansas was her first on the LPGA Tour since winning in Portland back in 2014. (LPGA PHoto)

“I always knew that I could win more than one. To actually do it means a lot. I think now having two wins seems so much more solid than just having one. People might say it’s a fluke if they won once. Now I’ve solidified that, and I think my game is trending in the right direction,” Ernst said..

After playing 5 weeks in a row Ernst now gets a week off to celebrate the win.

A trip back home to Seneca and a chance to share the victory with her parents is on the schedule.

LPGA Tour highlights of Ernst final round are available at:https://www.lpga.com/videos/2020/walmart-rd3-ernst-hl