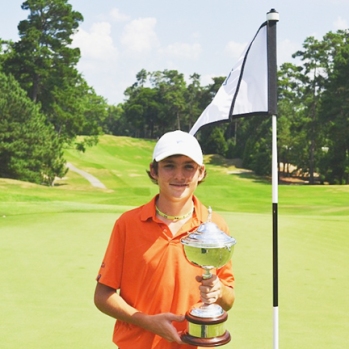 Trent Phillips shot a final round 64 to win the Grant Bennett Florence Junior Invitational by one shot.

This win was in the boys 15-17 year old age group. His last victory at the event was a couple of years ago when he was playing in a younger division.

Phillips shot a final round 64 to match the tournament low score and a 131 total for the 36 hole event.

He started the final round in third place three shots behind Jake Carter of Aiken and two shots behind Caleb Proveaux of Gilbert.

“I didn’t really do anything special or different,” said the new champion. “I just hit it on the green and made my putts,” he noted.

Phillips had spent some time between rounds working on his putting with his father. The time spent on alignment seemed to free up the young golfer to concentrate on speed when he got back on the course.

Phillips who has been posting a lot of low numbers recently believes the 64 is his lowest round in tournament competition.

The rising sophomore at Boiling Springs High School made three birdies on the front nine holes and four more on the back. He ran off a string of three straight birdies on holes 12-14.

“I really never had to work very hard to get up and down. My iron play was really strong and that gave me a lot of birdie chances,” he said.

About the only trouble Phillips got into was on the 17th hole when his tee shot landed behind some trees in the 18th fairway. Observers didn’t think he had a chance to get out of that trouble. With only a one shot lead it could have been a turning point.

Instead Phillips found enough of a gap in the tree line to hit a low punch shot that ran up to 14 feet from the pin.

“It could have been the best shot I hit this year, so far. I had a few options on that shot, but I played the one that I thought was the smartest,” he said.

Carter shot a final round 68 to finish one shot back and Proveaux finished three shots off the pace set by Phillips.

Trent’s brother Trevor, who won this tournament two years ago finished in fourth place after shooting a final round 65.