Langdale and Clemson lead at The Cliffs

Austin Langdale has a two shot lead after the first round of the Clemson Invitational.

Clemson’s Austin Langdale shot his career best round to take the first round lead at the Clemson Invitational being played at The Cliffs at Keowee Falls.

Langdale bettered his career best round by one shot when he birdied the 18th hole to give the Tiger golfer a two shot lead in the individual standings.

“I was real solid off the tee,” said Langdale. “I made a few putts and that got things going. It has always been this time of year I get into form when the weather warms up,” he said.

The Clemson junior helped his team to a nine shot lead over Louisville. Georgia Tech is third, Michigan State is fourth and Winthrop is fifth.

Carson Young is tied for third after the first round of the Clemson Invitational. 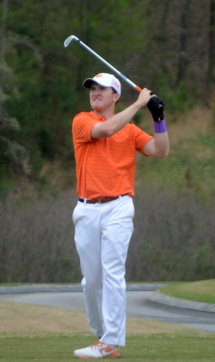 Stephen Behr is tied for third place with Carson Young.

The Tigers placed five golfers in the top-ten all with rounds under par. After Langdale, Carson Young shot a 3-under par 69 to be in a tie with teammate Stephen Behr for third place.

Coleman Self, playing as an individual shot a 2-under par 70.

Freshman Coleman Self, playing as an individual entrant shot a 2-under par 70 to be in fifth place.

Bryson Nimmer, another Tiger freshman, playing as a member of the Clemson team tied for seventh place after shooting a 1-under 71.

“I know everyone on the team was excited about us hosting this tournament,” said Clemson golf coach Larry Penley. “They were a little nervous, but we got off to a good start. I’m tickled to death with the way we are playing,” added the coach.

The Tigers tee off on Saturday starting at 10 am on hole number 1.