Clemson holds the lead at The Cliffs

Clemson continues to hold a big lead after the second round of the Clemson Invitational at The Cliffs at Keowee Falls. The Tigers lead Georgia Tech by nine shots going into the final round.

Clemson shot a team total of 2-over par, but did not lose any of their lead from the first round.

Georgia Tech had the best team round of the day shooting a 1-under par 287 to move into second place. Louisville dropped a spot to third place after shooting 3-over par. 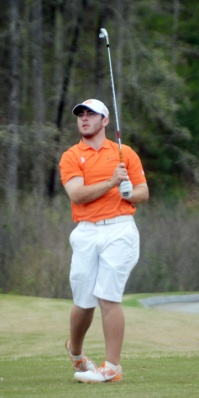 Austin Langdale is in a three-way tie for second place.

First round leader Austin Langdale of Clemson shot an even par round of 72, but Vince Whaley of Georgia Tech matched Langdale’s first round score of 5-under par 67 to take over the individual lead.

Langdale is tied with Sam Weatherhead of Michigan State and Robin Sciot-Siegrist of Louisville in second.

Stephen Behr is fifth and Carson Young is sixth helping the Tigers to the lead. 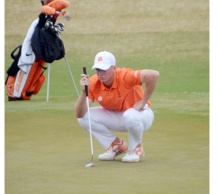 Josh Fickes had the best round for Clemson with a 1-under par 71.

A pair of Clemson golfers playing as individuals are in the top-15. Josh Fickes had the best round of any Clemson golfer shooting a 1-under par 71 to move to a tie for 19th place.

Coleman Self was 3-over par on the day and dropped from fifth place to a tie for tenth place with teammate Bryson Nimmer.

The final round will begin at 9 am on Sunday off both number one and number 10 tees. Spectators are welcome and there is no charge.