Lauren Stephenson was one of two freshmen at Clemson to be medalists in tournament play.

The decision Lauren Stephenson made to leave Clemson and the women’s golf team did not happen overnight. Instead, it was a decision she had been thinking about since the first of the year.

“It was a tough decision and one that I had been struggling with since December,” said the former Clemson golfer. “I grew up a Clemson fan in a Clemson family, but sometimes things work out differently than you expect,” she said.

Stephenson was half of a freshman class that appeared to get the women’s program back on track after the team took a step back in its second season.

Stephenson was joined by Alice Hewson from England giving Clemson two players who were immediately competitive and seemed poised to be the foundation of future success.

Hewson won two tournaments as a freshman and Stephenson was a co-medalist at the event played at Yale. Both earned recognition and honors during the year. Hewson was named to the Great Britain and Ireland Curtis Cup team to play this summer.

Stephenson made her request for a release from Clemson just as the Tigers were getting ready for NCAA play. The matter was set aside until after the season was completed.

At the NCAA Regional at Shoal Creek, Alabama, the Tigers were paired with Alabama in the second round of stroke play.

Stephenson was paired with Alabama’s top golfer Emma Talley. Knowing she was planning to leave Clemson, Stephenson asked Talley about the Alabama program.

“I asked her about her experience and the coaching staff. She told me she enjoyed it at Alabama and that got me interested,” said Stephenson. 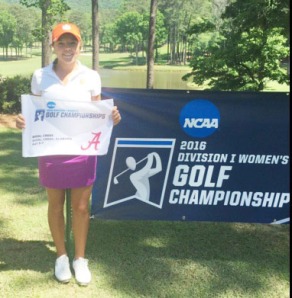 Stephenson was the first Clemson women’s golf to play in the NCAA Championship.

While the Tigers did not advance to the national championship, Stephenson earned an invitation as an individual player with a fifth place finish at the Regional. She finished her Clemson career at the NCAA Championship in Eugene, Oregon, but failed to make the cut.

The process of picking a new school began immediately after the season was completed. Clemson released Stephenson from her scholarship. She was free to consider any school with the exception of other ACC schools and South Carolina.

Since she was given her release, Stephenson will be eligible to play at Alabama next year. There could be a spot on the Crimson Tide roster open for her since two of the team’s top players, Talley and Janie Jackson have finished their eligibility.

“I want to be a professional golfer and being part of such an amazing program is going to help me meet my goals and dreams,” she said.

The Alabama women’s program won the 2012 NCAA Championship and had the school’s first individual champion last year when Talley was the stroke play medalist.

Mic Potter is the head coach at Alabama. He has been with the program for the last 11 years after an outstanding 22 years as the head coach of the Furman women’s program.

Potter has a well earned reputation for developing top ranked teams and players. While at Furman he coached Dottie Pepper and since taking over at Alabama five Crimson Tide players have LPGA status.

Stephenson won a USGA qualifying tournament for one of two places available in the US Women’s Open.

“Going to Alabama will give me an even better chance to become a professional. Being under him (Potter) as a player will help me grow and develop,” said the new Crimson Tide golfer.

Stephenson believes that one major advantage she will gain by being at Alabama is being a part of a program that has already had success.

“Getting that experience takes time. They know what it is like to win a national championship. They have had a lot of success and it is just going to be a better team environment,” said Stephenson.

While Stephenson’s loss is considerable the Tigers recruited a very capable replacement during the last signing period.

Ana Paula Valdes is a native of Mexico and now a resident of Florida. Among her accomplishments are a championship at the Verizon Junior Heritage at Hilton Head, a victory in the prestigious women’s Porter Cup amateur and making match play at the US Women’s Amateur.

“From a golf standpoint, I chose Clemson because of the passion and competitiveness within the golf team and coaches. The more I got to know them the more I saw myself as a perfect fit for the team, a team that is constantly pushing one another and helping each other grow, not only as players, but as people as well,” said Valdes when she signed with Clemson last November.

Stephenson knows that she is going to miss many things at Clemson. “I know I will miss my teammates. Me and Alice (Hewson) became close. I know I am going to miss football because I have been a fan since I was little,” said Stephenson.