Gracyn Burgess of Lexington has the first round lead in the SC AAAAA girls championship. (file photo)

The first round of the South Carolina High School girls championships has been completed and Lexington High School is in position to return to their position as the top girls team in AAAAA.

Last year the Wildcats missed winning the state title for only the second time in a dozen years when Dorman swept to the title.

Led by future Clemson golfer Gracyn Burgess, Lexington has the first round lead in the championship being played at The Members Club at Wildwood in Columbia.

Burgess shot a 2-over par 74 to take a one shot lead over Parker Stalvey of Blythewood. Alyssa Campbell of Clover and Jensen Castle of White Knoll are tied for third.

Lexington holds a 16 shot lead over White Knoll after the first round. Blythewood is third with Boiling Springs in fourth place.

Upstate teams from Spartanburg, Dorman and Byrnes hold positions six through eight going into the final round.

Complete scoring is available at http://www.birdiefire.com 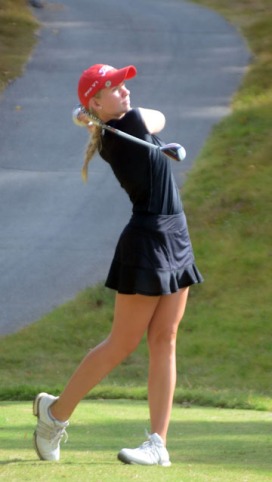 Smith Knaffle of St. James is the first round leader at the AAAA championship being played in Conway. (File photo)

St. James High School from Murrells Inlet has the first round lead in the state AAAA championship being played at the Hackler Course in Conway. The team shot a 314 total to take a 17 shot lead into the final round.

The Sharks were led by Smith Knaffle who has the individual lead. Knaffle shot a 3-under par 69 to lead the individual portion of the tournament by five shots over two golfers.

Baylee Evans of Lancaster and Jodee Tindal of South Point are in a two-way tie for second place.

Daniel High School, the Upper State champion, is in second place going into the final round. Daniel shot a team total 331. Greenville is in third place with a 334 total while Travelers Rest is in fourth at 337.

Emily Cox of Lancaster is the leader of the AAA state championship being played at Carolina Springs. (File photo)

Bishop England has a 19 stroke lead over Bluffton after the first round of the AAA championship being played at Carolina Springs. The Bishops shot a 315 total in the opening round.

Emily Cox of Lancaster, a two-time winner of The Blade Junior championship is the individual leader after shooting a 5-under par 67.

Gabriela Martinez from Oceanside is second at 2-under par 70. Upstate champion Peyton Gillespie from Christ Church is third at 1-under par 71.

Oceanside is in third place of the team competition while the co-upstate champions from St. Joseph’s and Powdersville are in fourth and fifth place.