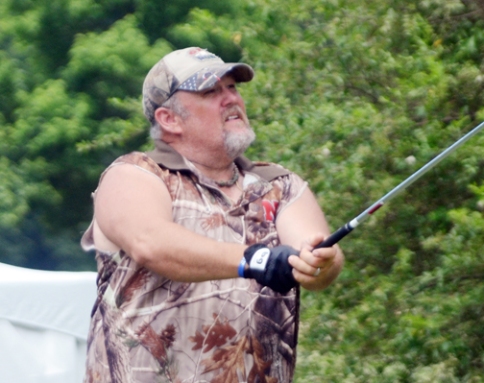 Larry the Cable Guy was among the celebrities on the course at Furman in the first round of the BMW Charity Classic.

It would be very difficult to take a golfer in camo and cut off sleeves seriously, and the fans at the BMW Charity Pro-Am presented by Synnex didn’t.

Instead they had fun with Larry the Cable Guy and the rest of the celebrities who make the Web.com Tour stop in the Upstate unique.

Tour pros are paired with local amateurs and national celebrities for three days of the tournament played on three different courses around Greenville.

While the Web.com professionals have a scorecard in their pocket and are at work trying to take the next step to the PGA Tour, the rest of the field is enjoying their time playing inside the ropes.

The Super Bowl champion tried to come to Greenville to play in the BMW last year, but scheduling kept him from appearing.

This year his scheduled cleared and he is paired with his friend Web.com pro John Mallinger.

“I’ve enjoyed my time here in Greenville,” said Rodgers. “The people are all really friendly and there are more than a few Packer fans around,” he added. 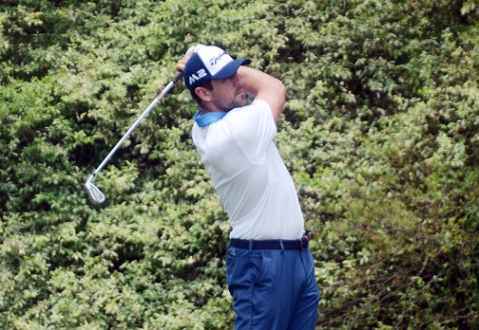 Green Bay Packers quarterback Aaron Rodgers and his partner finished the first round of the BMW Charity Classic at 11-under par.

On the course Rodgers is another one of a group of NFL quarterbacks who are very comfortable at playing the game.

The All-Pro quarterback sees some similarities between making plays on the field and hitting shots on the course.

“You have got to be able to block out the distractions and focus. Tony (Romo) kind of set the standard for all of us trying to make the US Open. Yeah, there are some competitive rivalries on the golf course for quarterbacks.

Rodgers and Mallinger finished their first round with a very respectable 11-under par.

The total put the team three shots behind a group of four other teams that carded scores of 14-under par. The top celebrities and their pro partner get to play a fourth round on Sunday at Thornblade Club.

Larry the Cable Guy and his partner Brandon Crick finished their first round at 8-under par.

By his own admission there are a few things that keep Larry from being a better golfer, but he thinks he is gaining on them.

“I usually come out and start out bad and by Saturday I got everybody sucked in,” he said.

The fan following for “LCG” was as large as any of the celebrities who played at Furman. While he may not look like he takes the game seriously he did hit some good shots.

“If I could get off the tee box and use an iron effectively and putt precisely, I’d play pretty good golf,” he said.

Mark Anguiano’s first-round 62 set the pace on a day of low scoring at the BMW Charity Pro-Am. (Enrique Berardi/PGATOUR.COM)

The tournament leader played his first round at Furman. Mark Anguiano shot a bogey free round and finished at 9-under par on the par 71 Furman course. Anguaino’s 62 matches the lowest 18-hole score on the Web.com Tour this season.

Anguiano has a one-stroke opening-round lead over Andrew Yun, Blake Adams and Stephan Jaeger. The tournament leader will play his second round at The Preserve at Verdae on Friday.