Byrd returns to the PGA Tour

“It’s so satisfying,” said a relieved Jonathan Byrd after he won his way back on to the PGA Tour. 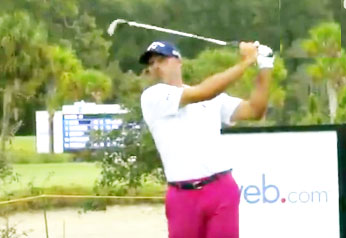 Jonathan Byrd won the Web.com Tour Championship. He was 24 under par and won by three shots.

Byrd won the Web.com Tour championship at the Atlantic Beach Country Club in Florida. The Clemson grad finished the tournament at 24-under par for a three shot victory.

“I think every win is special, they all stand alone, but this  one’s very gratifying,” Byrd said. “I think a lot more hard work went into getting this win.  So it’s just very gratifying, very satisfying to just kind of keep laboring, keep laboring and it finally come to pass,” he said.

Byrd lost his Tour card three years ago. The former PGA Tour rookie of the year and a five time Tour champion has played some Tour events and some Web.com events trying to work his way back to the big tour.

Byrd did have some good finishes during the past season. He finished fifth in the John Deere Classic on the PGA Tour. He earned a fifth and eighth place finish on the Web.com Tour before his win in the championship. His season ending win moved him from 55th on the Web.com money list to third.

“You never know when it’s going to be your week and this week was my week. I played great, I got great breaks to go along with it, I made putts and it just kind of came easy this week,” he said.

Jonathan Byrd and his family celebrated his win at the Web.com Tour Championship. (From Web.com Tour)

An added extra that came along with the victory was the opportunity for Byrd’s youngest daughter to see her father win a tournament. She was not here for his last win when he won the Tournament of Champions in 2011.

“My youngest, the five‑year‑old, never got to see me win a tournament and she got to be here today. So it’s just very gratifying, very satisfying to just kind of keep laboring, keep laboring and it finally come to pass,” concluded Byrd.

Web.com Tour contributed some material for this story.