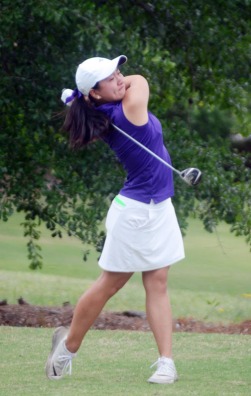 Alice Chen is tied for second going into the final round of the Moon Golf Invitational.

The 8th ranked Lady Paladins opened their spring season by leading the first round at the Moon Golf Invitational in Melbourne, Florida.

The Furman team shot a two-round total of 1-under par to hold a 5-shot lead over Augusta at the Duran Golf Club.

Alice Chen is tied for second place. The senior had the best 36 hole score for Furman posting rounds of 70-71 for a 141 and a 3-under par total.

Defending SoCon individual champion Natalie Srinivasan is tied for sixth place at 2-under par going into the final round on Tuesday.

Live scoring is available at http://www.golfstat.com.

The Tigers gained two spots after the second round of the Puerto Rico Classic. Clemson is now tied for third place at 2-over for the team.

Georgia Tech has taken the lead and stands at 6-under par going into the final round of the tournament on Tuesday. Clemson trails Tech by 8-shots.

Freshman Turk Pettit continues to lead the Tigers by posting his second straight 2-under par round of 69. Pettit is at 4-under par and trails the tournament’s individual leader, Lee Hodges of Alabama by 3-shots.

Another Tiger freshman Colby Patton is at 1-under par and tied for 11th place.

Sydney Legacy had the best round for the Tigers carding a 77 in the second round.

Difficult weather conditions took its toll on the Tigers at the Sugar Bowl Classic in New Orleans.

Clemson is now 14th in the tournament while Florida continues to hold the lead going into the final round.

Alice Hewson was again the top Tiger in the tournament now in 26th place. Sydney Legacy has the best individual score for Clemson in the second round carding a 5-over par 77.

The final round is scheduled for Tuesday at the English Turn Golf Club.

Live scoring is available at http://www.golfstat.com.

Lee University has an 18 stroke lead over Anderson University after the first round of the Converse College Spring Invitational being played at The Carolina Country Club.

Tyler Dawson of Converse is the top local golfer in the tournament. Dawson shot a 5-over par 77 to be tied for fifth place.