Tiger’s men and women in second at ACC tourneys 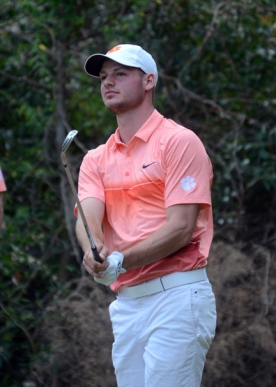 Doc Redman shot a 3-under par 69 to stand at 8-under par and be in a three-way tie for third place. (File Photo)

It was a good day for both Clemson golf teams as the men and the women are in second place at their respective ACC championships.

The Clemson men are tied for second place going into the final round of the mens championship at the Old North State Club in New London, NC.

The Clemson women’s team is also in second place. The Tigers played the first round of their tournament at the Grandover Resort East course in Greensboro,NC.

The Tigers finished at 8-under par for the second round and now are tied with Notre Dame, 6-shots behind Georgia Tech. The Yellow Jackets shot an 11 under par team total of 277 for the lead.

The Clemson men were once again led by US Amateur champion Doc Redman. The Tiger sophomore shot a 3-under par 69 for a two day total of 8-under par. Redman is in a three way tie for third place, four shots behind the leader.

A pair of Virginia golfers hold the top two spots in the individual standings. Thomas Walsh shot a 7-under par 65 to take the lead with a 132 total.

Turk Pettit shot a second round 3-under par 69 to help the Tigers move up to second place. (File Photo)

His teammate Danny Walker is 10-under par after shooting a second round 3-under par 69.

Helping Redman move the Tigers up to second place was another fine round by Bryson Nimmer. The Tiger junior finished at 1-under par 71 and now is in a tie for 16th place.

Turk Pettit had been the Tigers scoring leader through much of the season, but he was 1-over par in the first round. The second round was better as the Clemson freshman shot a 3-under par 69 to be in a tie for 24th place.

The Tigers will be paired with Georgia Tech and Notre Dame in the final round. Clemson’s tee times begin at 10 AM from the first tee.

Live scoring is available at http://www.golfstate.com.

The Clemson women opened their tournament with a team total of 2-under par. The Tigers trail Duke by four shots and lead third place Florida State by 5-shots.

The 286 total by Clemson was the lowest round shot by the Tigers in the ACC Tournament.

Sydney Legacy is challenging for the lead at the ACC Women’s tournament. Legacy is second after the first round. (File Photo)

Senior Sydney Legacy is challenging for the individual lead along with teammate Alice Hewson.

Legacy trails Leona MaGuire of Duke by two shots after shooting a 3-under par 69 in the opening round. Legacy’s score was the first time a Tiger golfer has carded a round in the 60s in the conference tournament.

Hewson is one shot behind Legacy at 2-under par 70. Freshman Kennedy Swann shot even par to be in a tie for eighth place.

The Clemson women play two more rounds and will complete the tournament on Monday in Greensboro. Live scoring is available at http://www.golfstat.com.