Chris Miller is leaving the SCJGA after 18 years of service at the state association.

The longtime administrator has decided to leave the SCJGA after 18 years of service to golfers in South Carolina.

“Chris has been a great asset to our Association for the last eighteen years.  A large reason we are where we are today with our Junior Golf Association is because of him and his dedication.  He will be missed,” said Biff Lathrop, SCGA Executive Director.

Miller has been in charge of tournament operations for the SCJGA.

Under Miller’s direction and with the support of the SCGA board of directors the junior program was recognized by a national golf magazine as the best junior program in the country.

Miller began his time at the SCGA after being a PGA Professional and a high school golf coach in the Columbia area.

Among the golfers that Miller helped start in the game is World #1 Dustin Johnson. Recent PGA Tour winners like Wesley Bryan, Kevin Kisner, Lucas Glover, Jonathan Byrd and many more played in tournaments Miller ran for the SCJGA. 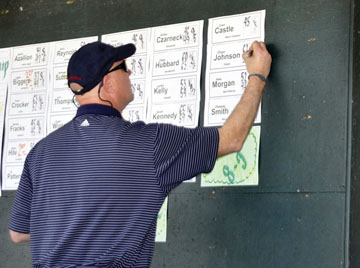 Miller has been the keeper of the state junior rankings which has helped many young golfers showcase their skills to college coaches.

As the director of the junior association he has been a part of helping the many juniors who have gone on to play college golf and even more young golfers who have enjoyed playing the game and adding golf to their life.

Miller had reduced his duties at the beginning of the year leaving the day to day operations and became the senior director of the junior program.

Justin Fleming, who has been with the SCGA since 2002, was promoted to the director of the junior golf program at the state organization earlier this year.

Miller will still be a part of the SCJGA as a volunteer and also will help the SCGA with rules seminars during the year.