Gordon is National HS Golfer of the Year

Zack Gordon from Gaffney has been named the outstanding high school senior golfer in the country by the National High School Coaches Association.

When Zack Gordon shot a 10-under par 62 in the final round of the South Carolina AAAAA state championship more than a few people noticed.

The National High School Coaches Association took notice of his record setting performance and the rest of an outstanding senior year.

The organization recognized Gordon as their male senior high school golfer of the year.  He is the first South Carolina golfer to win the national award.

“I really don’t know how they picked me, but this is a really big honor to be a national player of the year,” he said. “I guess winning the state championship the way I did may have helped,” said Gordon. 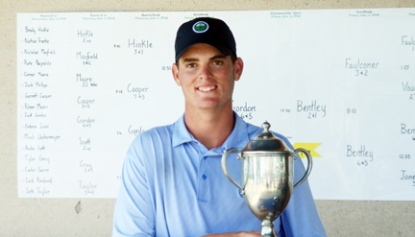 Gordon has collected a number of championships including the CGA SC Match Play championship, the 2016 Carolinas PGA Junior and the 2015 Orange Jacket title,

He will receive a trophy, plus he will be honored in the National High School Sports Digital Hall of Fame Museum.

“This is pretty big honor for someone from Gaffney to receive,” he noted.

In addition to winning the AAAAA individual championship and helping his Gaffney team to the state title Gordon also claimed another  important win during the year.

He finished second at The Blade, The Southern Cross and at The Beth Daniel Junior Azalea. He also shot a final round 65 in the SCGA Amateur to finish in a tie for fourth.

His golfing resume includes a victory at the Orange Jacket in 2015 and the Carolinas PGA Junior in 2016.

“Zack is an excellent example what this award stands for,” said Eric Hess, Executive Director of the NHSCA.  “Zack has excelled on the golf course and in the classroom.  We congratulate him on an outstanding high school career and wish him good luck in college,” he said.

The Gaffney High School grad will play college golf at Clemson this fall.

Gordon has signed to play college golf at Clemson and brings this important national award with him.

The Gaffney High School grad has not been playing golf as long as many of the players he competes against.

Gordon began playing when he was 13 and got serious about the game after a round of miniature golf.

“A bunch of us went to play Putt-Putt and I had the low score. After that I was ready to play golf from then on,” he said.

This summer Gordon will play in the Players Am in July and the SC Amateur in early August before beginning his freshman year at Clemson in the middle of August.

“I’m looking forward to playing college golf. I would like to make the top-five and play in some tournaments and do some good for Clemson,” he said.

The NHSCA has presented the award each year since 2000. Past winners have included PGA Tour stars Jordan Spieth, Rickie Fowler and Brian Harmon. The list also includes a number of golfers who went on to have All-American college careers.