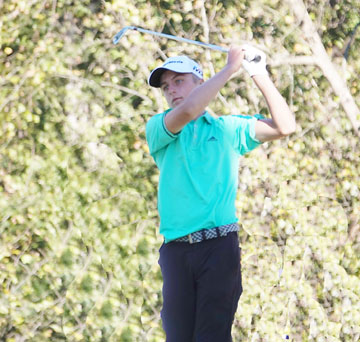 Jonathan Griz from Bluffton is the youngest male golfer to win the Jay Haas Player of the Year Award.

Jonathan Griz from Bluffton and Abigail Schimpf from Daniel Island have finished the year on the top of the Heritage Foundation Junior rankings.

The two top golfers earned their awards by their finishes in state, regional and national championship events.

Griz followed up the win at the Orange Jacket with a come from behind victory at the prestigious Bobby Chapman Junior Invitational. He started the final round trailing the leader by six shots, but made up the ground and won his first significant national event.

He also won a pair of IJGT events as well as the Beaufort County High School Invitational and made the round of 32 at the US Junior.

Of the 23 events used in the ranking Griz posted 8 wins and 12 top-ten finishes.

Gene Zeigler from Florence was second with Drayton Stewart from Charleston, Nicholas Mayfield from Rock Hill and BronsonMyers from Columbia finished in the top-five.

The future Clemson golfer will receive his Player of the Year award from Haas at Thornblade Club on January 2nd.

The future Gamecock golfer posted wins at the SCJGA Fall Challenge and the WSCGA Foundation Junior.

Jensen Castle from West Columbia finished second in the season long points race. Emily Dunlap from Mauldin, Isabella Rawl from Lexington and Rachel Rich from Mount Pleasant round out the top five golfers.