When a winning team talks about a complete team effort after a victory the members of the Blue Ridge golf team know exactly what they are talking about.

The Tigers did not place a single player on the All-County team yet came away with a win in the Greenville County High School championship played at Thornblade Club.

Blue Ridge finished with a score of 293 to top Eastside and Southside Christian by one stroke.

“We got a great team effort,” said Blue Ridge coach Randy Cisson. “We didn’t have one great player instead we had five really good players and that is how we won,” he said.

Blue Ridge did not have a golfer under par, but none of the Tigers were very much over par.

Walker Redmon, Jake Harvey and Taylor Meridith each shot rounds of 2-over par 73. The fourth counting score was turned in by Bo Upton who carded a 3-over par 74. 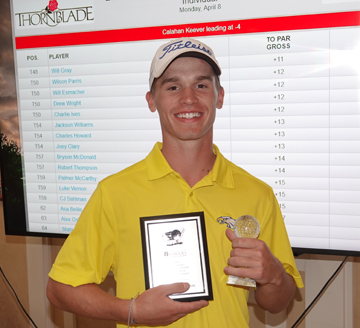 The individual championship was won by Eastside’s Calahan Keever.

The Eagles junior golfer posted a 4-under par 67 to win medalist honors by one shot.

“I was able to narrow down my misses and made a couple of long putts,” he said. “It feels pretty good to win,” said Keever.

The new county high school champion made 7 birdies during his round, but a par save on 18 made the difference.

“I got up and down and made a 15 footer for par. I made a few long putts today and only missed four greens,” said the Eastside junior.

Only five golfers were able to post under-par rounds. After Keever. Tillman Alverson finished one shot back.

Rafe Reynolds and Ian Faulconer finished at 2-under par 69 to tie for third place. Jonathan Brennan shot a 1-under par 70 to finish in fifth place.