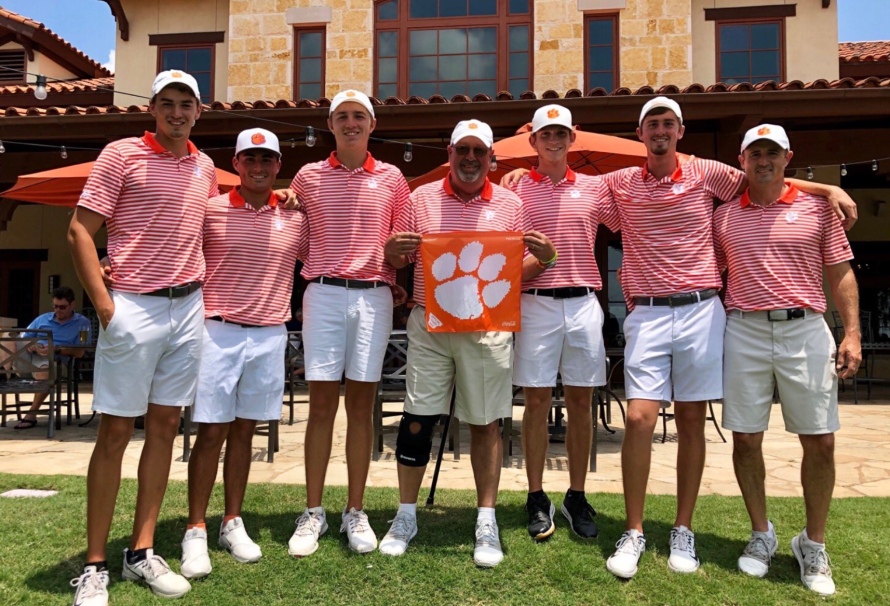 The Clemson Tigers punched their ticket to the national championship at the end of May. The Tigers finished third in the Austin Regional. (Clemson Photo)

When the ACC tournament was finished Clemson golf coach Larry Penley knew his team had to play a lot better if they were going to advance from a regional to the NCAA Finals.

The Tigers answered the call of their coach and put together three consistent rounds at the Austin, Texas Regional and will play for the NCAA championship at the end of May.

“Georgia Tech was so strong at the ACC it may have made our play look worse than it was,” said the Clemson coach. “We knew we had good players and we knew they could play better,” he said.

They did this week in Texas.

The Tigers shot rounds of 284-284-283 for an 851 total and a comfortable 7-shot margin between third and fourth place. The course was demanding, but it seemed to fit the Tigers games.

Texas took full advantage of their home course knowledge to win the regional with a 25-under par total. TCU was second while Pepperdine was fourth and Southern Cal was fifth.

Bryson Nimmer led the Tigers shooting a 3-under par total to finish in a tie for sixth place.

While Penley has been able to count on a top-10 finish from Nimmer in every event this year, in the Regional the Tigers got contributions from everyone of their five golfers.

“I think they might have gotten tired of not helping Bryson as much as they could. They wanted to contribute and they did. We had all five golfers contribute scores,” said the coach.

In the opening round Kyle Cottam led the Tigers with a solid 1-under par 70.

Jacob Bridgeman carded an even par 71 as did Colby Patton.

“Jacob and Colby helped us a lot in their first two rounds. This was a tough golf course and you had to keep the ball in the fairway. We have some very good ball strikers,” said the coach.

Sophomore Colby Patton finished in a tie for 8th place at the Austin Regional. (GolfClub Photo)

The only Tiger who seemed to get really comfortable on the slick greens was Patton. The sophomore shot two rounds of even par and finished off the tournament with a 3-under par 69 to end up in a tie for 8th place.

Nimmer got stronger as the week went on. He opened with a 1-over par 72, but followed it up with two rounds of 69 for a 210 total and a tie for sixth place.

“We stuck to our game plan and everyone contributed. We got a final round even par 71 from William Nottingham which meant every golfer contributed,” he said.

The game plan emphasized staying away from big numbers. The Tigers posted only 2 doubles in the 54 hole event.

The third-place finish was the best of the spring for the Tigers, who have finished exactly fourth in five tournaments this year.  “The good thing about this is we finished third, but we left some shots out there.  We can play better.   It will be interesting to see what we can do in Arkansas,”said the coach.

The national championship begins on May 24th. The top teams after the stroke play portion of the tournament will compete for the team title in a match play final and that is the next goal for the Tigers.

Penley and his team are looking forward to the championship and between now and when they leave they want to get some practice on the kind of turf that will be in Arkansas.

“What we have to do is find a golf course with zoysia fairways and bent grass greens because that is what we will play in Arkansas,” conclude Penley.