Two of the three defending South Carolina Girls High School champions from last year are in position to win another championship.

AAAAA champion Lexington is the only 2018 state champion that is not leading after the first round of 2019 tournament play. 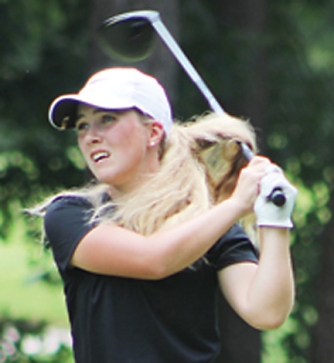 Chloe Holder from Wren has the individual lead in the AAAA championship. (GolfClub file photo)

The Lions shot a 321 total to hold a commanding lead over Wren after the first round.

“We got some really good play from our third and fourth players,” said golf coach Andy Swords. “Our number one and two players should be able to shave a couple of shots off their total in the final round,” he said.

The Lions were led by Jennifer Gao who carded a 78. Peyton O’Brien was one shot back at 79.

Individually, Wren’s Chloe Holder has a two shot lead over her teammate Katelyn Lee and Kennedy McGaha from Belton Honea-Path.

Rachel Rich from Oceanside has the individual lead at the AAA state championship. Rich shot a 5-under par 67 in the first round. (GolfClub file photo)

Oceanside Collegiate arguably is the best high school team in the state and they played like the top team in the first round of the AAA championship at the Hackler Course in Conway.

The Landsharks are trying for their third straight state title.

Oceanside posted an impressive 285 total to lead the field. Chesnee is in second place after shooting a 303 total to trail by 18 shots. Gilbert is in third place after carding a 322 total.

The Landsharks top five golfers include four of the top-15 players in the South Carolina Junior Girls rankings. After the first round of the state championship Oceanside has four golfers in the top eight.

Rachel Rich, the 2018 WSCGA Junior Champion has the lead after shooting a 5-under par 67. Teammate Emma Schimpf and Chesnee’s Sydney Roberts are tied for second after rounds of 3-under par 69. 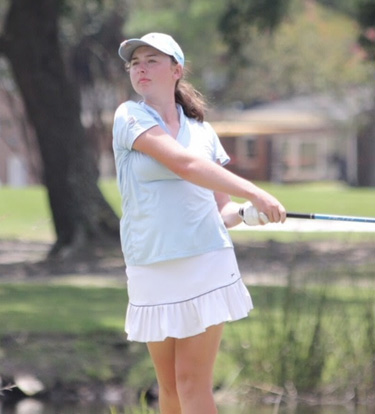 Boiling Springs’ MK Talledo posted a 1-over par round to be in third place going into the final round at the AAAAA championship. (Golfclub File Photo)

Lexington’s bid to win their fourth straight championship and the 14th title for the school is within reach, but the Wildcats will have to get past their neighbor from Blythewood.

The Bengals, one of the few teams that has a win over Lexington in tournament play this year, holds a three shot lead over the Wildcats going into the final round at the Mid Carolina Club in Prosperity.

Blythewood has the team lead and the individual leader in the championship.

Ella Stalvey holds a one-shot lead over Karlee Vardas from Lexington. Stalvey shot a 1-under par round on the par 73 course.

Talledo’s teammate Madison Dixon is in a tie for fourth place helping the Bulldogs to third place in the team competition.