Turk Pettit shot an opening round 6-under par 64 to take the first round lead at the Palmetto Golf Club in Aiken. (Clemson Photo)

Clemson and Virginia are two teams in the 15 team field at the Cleveland Golf Palmetto Intercollegiate being played at the Palmetto Golf Club in Aiken.

While there are 15 teams in the tournament the final round will be more like match play between the Tigers and the Cavaliers.

Clemson jumped out top a 4-shot lead after the first round over Virginia. In the second round, played on the same day, the Cavaliers cut two shots off the Tigers lead.

Tuesday’s final round will pair Clemson and Virginia together along with the third place Furman team, but the Tigers and Cavs have a 20 shot lead over the rest of the field.

Turk Pettit opened the tournament with a 6-under par 64 on the demanding par 70 course. He held a 3-shot lead over his teammate Kyle Cottam and Virginia’s Jimmie Massie.

In the second round another one of Pettit’s teammates chased down the first round leader and caught him by the end of 36 holes.

Jacob Bridgeman shot a second round 4-under par 66 to go along with his opening round 3-under par 67 to stand at 7-under par.

The final round will begin at 9 am on Tuesday using a shot-gun start format. 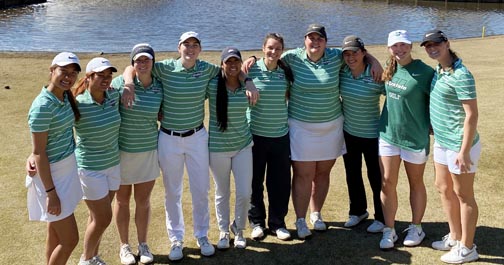 The Upstate Women’s team are in a tie for first place at the River Landing Classic at Wilmington. The team earned a spot at the top of the leader board after shooting a school record total 288 in the second round

USC Upstate women’s team set a new school record and moved into a three way tie for the lead after the second round at the River Landing Classic in Wilmington.

Upstate shot a school record 288 in the second round to tie High Point and Boston University at 14 over par and the lead going into the final round.

Anna Chanthaphaeng led the Spartans charge up the leader board. The Upstate senior jumped up 27 spots in the standings after shooting a 1-under par 71.

Beem Pabsimma shot rounds of 74 and 71 for a 145 total and is two shots behind the leader Katerina Doleckova from Boston University.

Pan Paksanont and Abigayle Hatcher are in the top-20 going into the final round.

The final round begins at 9 am on Tuesday.