Tigers and Bridgeman sweep up wins in Aiken

Jacob Bridgeman got his first college win and the Clemson Tigers put some new numbers in the record book on their way to a convincing individual and team victory at the Cleveland Golf Palmetto Intercollegiate.

The team title was the first of the year for the 20th ranked Tigers and the 79th career win for head coach Larry Penley.

“The five guys here this week really did a tremendous job,” said the coach. Jacob Bridgeman was fantastic. Turk Pettit was solid all week and William Nottingham was tremendous,” Penley noted.

The Clemson  coach also had praise for the Tigers in the fourth and fifth spots.

“We got some good rounds out of Zach Gordon and Kyle Cottam got us started with a 67 in the first round,” said Penley.

The Tigers finished 16 shots in front of second place Virginia.

Clemson came within a shot of matching their 17 shot victory margin at the 2016 Bandon Dunes Invitational for second place in the all time record book.

“It was a total team effort,” added the coach.

Turk Pettit shot an o to opening round 6-under par 64 to help the Tigers lead from start to finish. (GolfClub Photo)

Bridgeman started the final round tied with teammate Turk Pettit for the lead, but three straight birdies on holes 3, 4 and 5 gave the Tiger sophomore a lead he never gave up.

“I played the last round the same way I played the first two,” said Bridgeman. “On number 3, I made a long putt, a 25 footer. On four I was 2 feet and on five I was five feet. I made the birdies when I hit it close and hit the middle of the green all day,” he said.

Bridgeman finished at 5-under par 65 for a 198 total and a four shot win over Pettit.

The first time winner had confidence playing the challenging Palmetto Club course because he had a lot of experience from playing it in the past.

“I know this course pretty well. I’ve played here 10 or 12 times so I had some confidence I could play well,” he said.

Bridgeman has been close to a win a few times in his first year and a half as a Tiger. It has never been a question of if he would get a victory instead the question was when.

“I knew it was just a matter of time before I won. I wasn’t concerned. I wasn’t forcing it, I just let it come to me,” he said.

While Bridgeman hit a lot of excellent shots he also had at least one shot that turned out to be more lucky than good.

His tee shot on number 18, a 306 yard par 4, crossed part of the patio area near the club house, bounced over out of bounds markers and landed 20 yards from the green.

His unorthodox par on the final hole gave Bridgeman a 198 total for the tournament.

Nottingham, the only senior in the Clemson lineup, had one bogey on the front nine and carded a 5-under par 31 on the back nine to finish third. 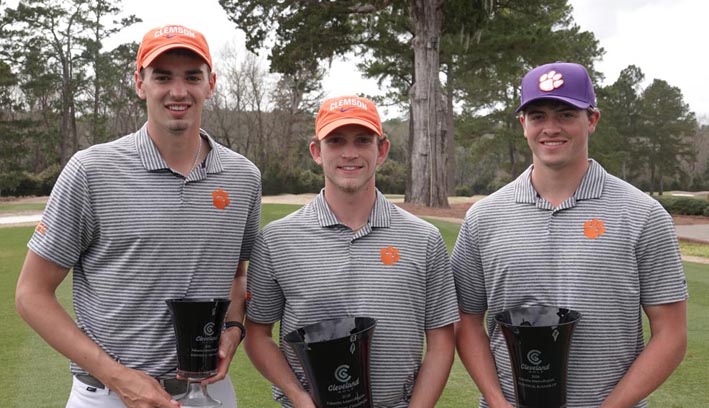 The 1,2,3 finish for the Tigers was the first time Clemson golfers swept the top three spots since March of 1987 when Chris Patton and Kevin Johnson tied for first and Jason Griffith finished third at the Gamecock Invitational in Columbia, SC.

Bridgeman, Pettit and Nottingham carded scores in the 60s for all three rounds marking the first time in Clemson history that three Tigers shot three rounds in the 60s in the same tournament.

Cottam finished 17th, while Gordon finished 13th to put all five Tigers in the top-twenty. 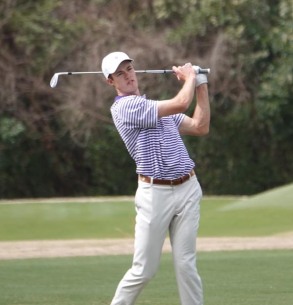 Furman placed two golfers in the top-10 and finished third in the 15 team field.

Stephen Reynolds carded a 210 total to finish 8th while Keller Harper closed out the 54 hole event with a 1-under par 69 to finish 10th.

Clemson’s final round score of 210 helped the Tigers finish at 813. Only the Tigers 811 final score at the 2019 Maui Jim Intercollegiate is better in the record book.

“I thought we played very well at times in the first rounds. Its tougher to come out and win when you are expected to win. Being the highest seeded team here this week we were expected to win and I think the guys embraced the challenge,” Penley said.

The Tigers have now won the tournament played at the historic Palmetto Golf Club in Aiken for the eighth time. Penley trails Wake Forrest’s legendary golf coach Jesse Haddock by four victories for the all-time coaching wins record in the ACC.

“I think we can learn from this and I think we are going to see some really good golf this spring, I think our best is coming,” concluded Penley

Hear from Jacob Bridgeman about his first college win.