Rain halts SC Am, Castle advances, Morgan out of US Am

Jonathan Griz has the lead among golfers who finished the first round at the SC Amateur. Weather forced the suspension of the first round with half the field still on the course. (SCGA Photo)

The South Carolina Amateur has had more than its share of weather problems in the last few years and the 2020 championship kept the streak intact.

High School golfer Jonathan Griz, from Hilton Head, is the clubhouse leader after shooting a 4-under par 68 at the Columbia Country Club.

Griz was able to finish before the weather halted play for the day.

The 16 year old has won Junior Player of the Year honors from both the SCGA and the CGA and recently won the Junior North-South championship in Pinehurst,

Among the golfers that finished the first round, Griz has a one-shot lead over Kyle Beardon from Barnwell.

The defending champion Tyler Gray from Lugoff finished his round and posted a 2-under par 70.

Almost half the field was left on the course when the decision was made to suspend play.  Some golfers only played 6 holes before weather forced play to be stopped.

Ryan Reynolds from Camden is tied with Griz, but Reynolds has only played 8 holes in his first round.

Presbyterian College golfer Jimmy McCollum is tied with Beardon, but like Reynolds he has only played eight holes.

Nine golfers are tied with Gray at 2-under par with 7 of the 9 still on the course.

Gamecock golfer Jack Parrott and former NC State golfer Christian Salzer from Sumter are also at 2-under par, but have finished their first round.

Golfers are scheduled to resume play at 7:30 on Friday with the second round beginning immediately after the first round is completed.

Scores from the suspended first round are available at https://www.golfgenius.com/pages/2495464

Castle advancers, Morgan eliminated at US Women’s Am 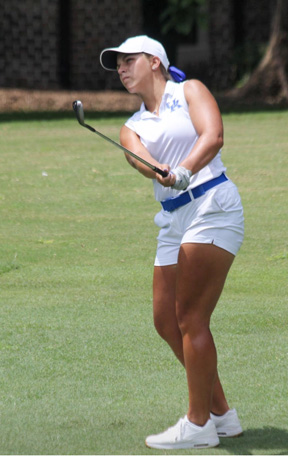 Kentucky golfer Jensen Castle from Columbia has advanced to the round of 32 at the US Women’s Amateur. (CGA File Photo)

University of Kentucky golfer Jensen Castle from Columbia won her first round match at the US Women’s Amateur in Rockville, Maryland.

Castle topped Wake Forest’s Vanessa Knecht 2 & 1 to advance to the round of 32 and face Notre Dame’s Lauren Beaudreau.

Furman golfer Anna Morgan from Spartanburg was knocked out of the tournament by 16 seed Rose Zhang.

Zang, who was the AJGA Junior Player of the Year and a Stanford commit, won the match 5 & 3.

Kuehn will match up with Arkansas’ Brooke Matthews in her round of 32 match.

Complete US Women’s Am scores are available at https://www.usga.org/content/usga/home-page/championships/2020/u-s–women-s-amateur.html#!scoring