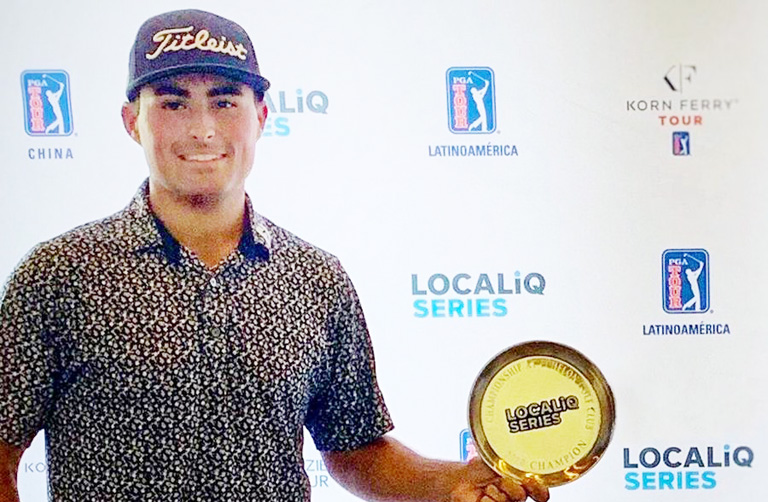 When the PGA Tour stopped play because of the Covid pandemic, golfers on all the associated Tours were simply left hanging.

The PGA Tour has made a comeback and seems to be working its way through these difficult days. The Korn-Ferry Tour resumed play last month.

However, the McKenzie Tour (Canada) and the LatinoAmerica Tour and the PGA Tour-China all suspended  and then cancelled their seasons.

Clemson grad Bryson Nimmer was one of those players left without a place to play.

Nimmer earned status on the McKenzie Tour right out of school. The 2019 grad played in 11 events, made the cut in 8, earned a top-10 and two more top-20s.

He finished last year ranked 32nd on the Tour, but never got a chance to start the new year. 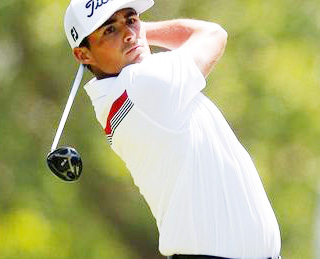 Nimmer has gone 38-under par in his two wins on the LocaliQ series. (PGA Tour Photo)

The 2020 season was to begin in California at the end of March.  Twelve events were cancelled and players were left to wait and wonder.

“I did a lot of practicing and spent a lot of time working out. I worked really hard on my short game and in the gym. I had some areas I needed to work on to get more stable,” he noted.

After getting its two main Tours operating the PGA Tour administrators put together a plan for the 100s of orphans who were left without a place to play when the three feeder Tours were cancelled.

The Tour created the LocaliQ Tour. The sponsor, http://www.localiq.com is a digital marketing company. The  new Tour includes 7 events, mostly in the Southeast, to accumulate points and eventually play in a kind of Tour championship in the Bahamas in late October.

The top-60 in each of the three Tours were given the opportunity to compete in the new series.

“The players are a lot of guys I played against in college. There are a few Korn-Ferry Tour players in each event. The fields are ultra competitive,” said Nimmer.

After three months of practice and plenty of time in the gym, Nimmer was ready to play with a scorecard in his pocket.

His first event of the season produced a victory. He shot a 194 total in the 54 hole event at The Golf Club of Georgia in Alpharetta. 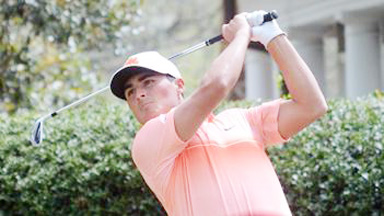 Nimmer was the 2019 ACC Player of the Year. He also was a 4-time All ACC and Academic ACC team member. (GolfClub Photo)

With a 3-shot lead Nimmer played the final hole safe, he hit a drive into the center of the fairway and laid up for a wedge to the green.

Instead of just putting it on the green, he put it in the hole for an eagle and the 4-shot victory.

“It felt great to get back to playing in something. All the extra practice I did made a difference. I hit the ball well and my short game was sharp,” he said.

The second event in the series was played at The Championship at Echelon Golf Club also in Alpharetta.

Nimmer kept up his outstanding play. He  finished the next tournament at 16-under par for a 2-shot win.

38 under par for his first two tournaments, not bad!

“I had played at the The Golf Club of Georgia in college and the momentum I got from winning there certainly helped in the next tournament,” said Nimmer. 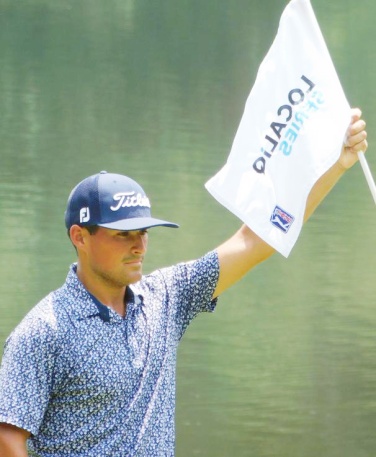 Nimmer finished off his first win with an eagle to end up at 22-under par. (PGATour Photo)

The next event is at Callaway Gardens starting on August 25th. Nimmer has a 700 point lead in the points race after the first two events.

“I’m playing well and I think I can keep it going. I’m going to be able to play in all the tournaments so I hope I can get one of those top-two spots and a Korn-Ferry start,” he said.

Like everyone, Nimmer is doing his best to be careful while he travels and safe when he stays at a tournament site.

“We don’t have the kind of tests they have on the PGA Tour. We get our temperature checked and asked a lot of questions, but they expect us to be responsible,” Nimmer said.

On the road there are no hotel perks, dinning in restaurants is frowned upon and almost anything other than sleeping, eating and playing golf is off limits.

“It is different and we all hope we can get back to normal soon. I think all the players are being responsible. They understand this is a chance to play and if we want to keep playing we can’t do some things,” he said.

Earlier this year when the McKenzie Tour was cancelled and the PGA Tour announced there would be no Korn-Ferry Tour School so golfers would not have the opportunity to improve their PGA Tour status.

Now with the LocaliQ Series Nimmer again has the chance to compete and play the game he loves and  establish a solid foundation to move up when the pandemic is behind us.

“I love the game. I love working on my game, I love playing the game, I love getting better, I’m obsessed with golf. This has been a difficult year, but it hasn’t changed my love for the game,” he concluded.

You can follow Nimmer on twitter. His handle is @chillinchico. The handle comes from a nickname he picked up when he was in high school. You can also follow  the LocaliQ Series on the PGATourLatino web site  at https://www.pgatour.com/la/en/tournaments/schedule.html