Holder wins back to back Orange Jacket titles 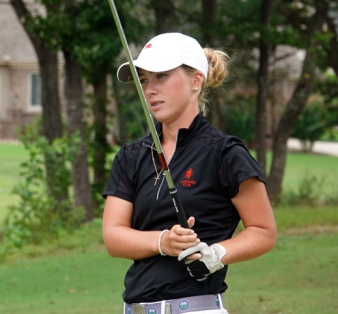 This year the Wren High School golfer set another record by becoming the first golfer, boy or girl, to win back to back titles in the 13 year history of the event.

The future Augusta State golfer shot a rain delayed opening round 3-under par 69 and followed it up with an identical 69 in the second round to win her second straight Orange Jacket by 7-shots.

“My putter was hot and that made a difference,” said the defending champion. “I birdied my last hole in the first round and eagled my final hole by making really good putts,” she said.

Holder had only one hole left to play when the first round was suspended just before dark on Saturday. A rain delay of almost 2-hours prevented any of the girls field to finish.

Holder was back at Brookstone Meadows early on Sunday when it wasn’t barely light to finish her first round and start her second.

Winners don’t really get an Orange Jacket, but if they did Chloe Holder would now have a matched set after becoming the first golfer to repeat as a winner of the championship. (GolfClub Photo)

“There wasn’t much light. You could hardly see anything when we started. I hit about 20 balls on the range to warm up, but it was so dark I never really saw where they went,” she joked.

Holder finished her first round just as the sun was coming up and then immediately began her final round.

In the second round Holder had a couple of birdies on her first nine and a couple of bogeys on the back nine, but her eagle on the final hole wrapped up the win.

“I hit driver and 6 iron to about 20 feet and dropped the putt. It was a great way to finish up. It is awesome to be able to defend a title, every golfer who wins wants to do that,” she said.

Chloe Holder (center) is the first golfer to win back to back Orange Jackets. She finished in front of Isabella Britt (left) and Kennedy McGaha (right) who tied for second. (GolfClub Photo)

Isabella Britt from Chesnee and Kennedy McGaha from Honea Path tied for second place. Each golfer finished at 1-over par  145 for the tournament.

Greenville’s Sarah Boteler  finished at 2-over par in fourth while Hannah Altman from Lake City finished in fifth place.

Holder’s 7-shot win was one shot better than her 6-shot victory at The Blade Junior Classic last July.

In between the victories Holder earned a second place finish in a playoff for the title at the Beth Daniel Junior Azalea last month in Charleston.

“I’m playing my game. I’m not fussing over misses. I’m hitting more greens and making putts, its been fun,” she said.

Holder is in the running for the Beth Daniel Player of the Year award, but it is a goal for the season and isn’t on her mind during tournament play.

“Sure, I would like to win it, but I want to concentrate on being the best player I can be during the season and hopefully that will be what it takes,” she said.

Holder has another chance to repeat as a champion when she defends her title at the CGA Vicki DiSantis Junior Girls Championship rescheduled to be played in late November.