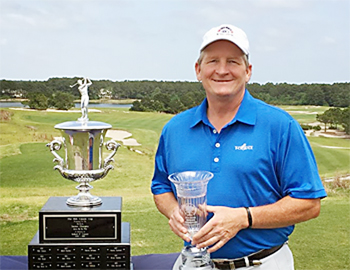 The former SCGA Mid-Am champion shot a final round even par 72 to take a 6 shot win over Duff Wagner of Taylors.

Hendley had rounds of 66-67-72 for the 205 total. Wagner shot a final round best 4-under par 68 to jump into second place. The two golfers had combined earlier in the year to win the SCGA Senior Four-Ball title.

Frank Ford of Charleston finished in third place. Tim Pope of Spartanburg was sixth while Matt Grandy of Greenville tied for seventh place.

The SCGA Senior championship was played at Bulls Bay in Awendaw. The event was open to golfers over the age of 55. The field consisted of 121 players this year.

Full scoring details available at http://www.scgolf.org.
Photo from the SCGA