One semi-final match went the full 18 holes and then three more. Defending champion Dawn Woodard of Thornblade Club was matched up against Maddisen Cox of Pickens.

Woodard had won five straight match play titles, but looked to be in trouble as the two golfers went to the back nine at Carolina.

Maddisen Cox of Pickens held a three hole lead on the back nine in her semi-final match with Dawn Woodard.

Cox extended her 2 hole lead to three before Woodard came charging back.

The former Furman golfer made two impressive birdies while Cox carded a bogey to even the match going to the 16th hole.

On number 16 Cox’s second shot landed in the middle of the green, but Woodard’s approach flew the green and rolled into the water. Her desperation pitch from the ball drop area did not go in and Cox was back in the lead by one hole.

On the 17th hole Woodard put her second shot within 8 feet of the pin and converted the birdie to tie the match again.

Woodard’s second shot on number 16 found the water and turned the lead back to Cox.

Both golfers parred number 18 and went to the first hole to continue the match.

Woodard and Cox had tap in pars on the first hole, but on the second hole the advantage appeared to swing to the young golfer who will play at James Madison next year.

Maddisen Cox looks on in frustration after missing a possible winning putt on the second extra hole.

Cox had a 10 foot down-hill putt to close out the match with a birdie, but the ball missed the hole and the playoff went to the third hole.

On the par-3 third hole Woodard landed on the green well short of the pin. Cox took a more aggressive approach and flew her ball over the pin and into the rough behind the green.

Her first attempt to get out of the rough failed and she used her third shot to get on the green. Meanwhile Woodard had lagged her ball to within short par putt range.

Cox missed her pitch from just off the green. Woodard rolled in her short par putt for the win and the chance to play for a sixth straight WSCGA Match Play title on Friday.

“She just made too many birdies,” said Woodard about her opponent. “She played great and it was a really tough match,” she added.

In the other semi-final Lea Venable from Holly Tree Country Club cruised through to top Jaelyn Tindal of Rock Hill. Venable won her match 7 & 6.

“I made six birdies on the front and was really playing well,” said Venable. “Some good things happen when you make that many birdies,” the current Greenville County Women’s champion said. 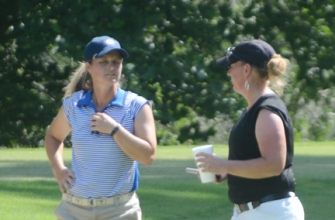 Dawn Woodard and Lea Venable will play for the 2015 WSCGA Match Play title on Friday starting at 10:20.

Now the two golfers who have played both against each other and teamed up in some events will play for the championship starting at about 10:20 on Friday.

In the State Division it will be Nancy Dodge versus Betty Jean Armbruster for the title. The Handicap Division title will be decided in the match between Jan Todd and Brenda Rutledge.