The final round started well for Venable, but Woodard had trouble finding the range with her putter.

“I missed a four-footer on the first hole and then missed another one on number five,” she said. “I just kept thinking it was going to get better, but it never did,” said Woodard.

Venable continued her strong play that produced 13 birdies in 28 holes during the quarter and semi-final round. Venable carried a 3 up lead into the final nine holes at the Carolina Country Club.

“Being a golfer you always wonder if you used them all up. I didn’t let up I played conservative, consistent and hit to the right spots. I was hitting the ball well and it really makes a difference when you are not scared to stand over the ball and hit it,” said Venable.

Venable lost the 13th hole to Woodard to drop back to a three hole lead. The two golfers halved the 14th hole.

On number 15 both golfers made the green on the par-3 hole. Venable had a 25 foot putt for a birdie. The putt lagged to within a foot of the hole and the par was conceded by Woodard. 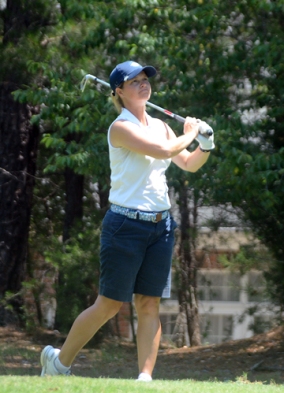 The defending champion had a tricky breaking putt from about 15 feet. The putt shot by the hole and left Woodard with a difficult 8-foot comeback putt for a par,

Woodard’s par putt rolled even with the hole and never broke. The miss meant Venable claimed the title 4&3.

“I’ve never really been a strong match play player. My number 1 goal this week was just to play the course and not look up. It started to work and then kept working. To do it playing against Dawn was pretty amazing,” said the new champion.

Venable adds the Match Play title to a couple of WSCGA State Amateur championships a partners title and a handful of Greenville County championships.

Woodard, who won a draining 21 hole match with James Madison University golfer Maddie Cox of Pickens in the semi final round, was disappointed that her streak came to an end.  “To win five in a row is pretty amazing. All streaks come to an end. I just wished I had played a little better in the final,” she said. 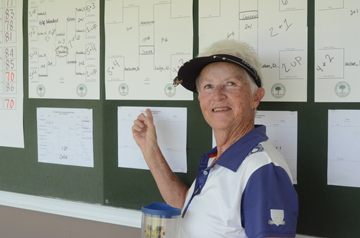 The tournament also included several other divisions. Nancy Dodge of Golden Hills Golf and Country Club in Gilbert  won the State Division title with a win over Betty Jean Armbruster of Carolina Country Club in 19 holes.

The Handicap Division title was won by Brenda Rutledge of River Falls Plantation. She topped Jan Todd of Pebble Creek 4&3 for the first ever handicap title.