Keenan Huskey finished his first round at 4-under par 68 and then posted an even better second round to hold the halfway lead at the South Carolina Amateur.

The USC golfer from Greenville shot a second round 5-under par 67 for a two round total of 135. He holds a five shot lead over 2008 amateur champion Lee Palms of Greenville. 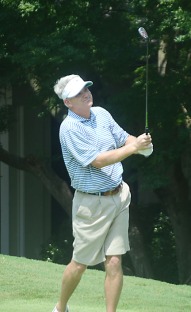 Walter Todd shot a 5-under par 67 to move up to third place.

Palms and Walter Todd of Laurens made a statement for the older golfers in the field. Palms followed up his first round 4-under par 68 with an even par round of 72.

Todd, a past CGA Mid-Am champion, matched Huskey’s 5-under par round of 67 to move up to third place at 3-under par after 36 holes.

The best round of the day was turned in by Hunter Nichols of Clinton. Nichols shot a 7-under par 65 to rebound from a difficult first round and jump up to 21st place. 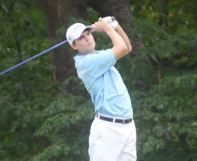 10 golfers will enter the weekend with scores under par. 2013 champion Carson Young of Clemson shot a 4-under 68 to move into a tie for seventh place with last year’s runner-up Alabama golfer Jonathan Hardee from Greer.

Thomas Todd of Greenville is tied for third.

First round leader Trent Phillips from Boiling Springs shot a 4-over par 76 to go with his first round 6-under par 66 and fell back to a tie for fourth place with Thomas Todd of Laurens and Ryan Carpenter of Aiken.

Here is an interview with Keenan Huskey on Friday