In just five years the Transou Junior has become a major event for young golfers in the fall. The growing popularity of the event has brought juniors from North Carolina to join the best golfers from the Palmetto State.

This year nine of the top-ten junior boys in South Carolina played in the tournament as a field of 98 players competed for the championship.

Elle Johnson and Brady Hinkle each put another victory on their golfing resume with wins at the tournament hosted by Cherokee National Golf Club in Gaffney.

Brady Hinkle from Lancaster, the 2016 CGA South Carolina Match Play champion, held off a late charge by Jacob Bridgeman to win the boys title by a shot.

Hinkle trailed Trent Phillips from Boiling Springs by one shot after the first round. Phillips shot a 2-under par 70, while Hinkle carded a 71.

It took the future College of Charleston golfer just one hole to erase the difference. Hinkle eagled his first hole in the second round.

“I made about a 15 footer for the eagle and then I made a bunch of birdies on the front nine,” Hinkle said as the young golfer finished the first nine holes at 5-under par 31.

He kept the momentum going on the back nine until he bogeyed number 15.

While Hinkle apperead to be in control of the tournament Jacob Bridgeman from Inman was shooting the best round of the event. The future Clemson golfer shot a 7-under par round of 65 to hold the clubhouse lead.

“I played well, but I gave a couple of shots back,” said Bridgeman. “I had two bogeys and I wasn’t able to birdie 18 (par-5) and I thought that could have made the difference,” he said.

Hinkle  seemed to be in control until the 15th hole. A bogey actually dropped him a shot behind Bridgeman, but he was able to get it back on the very next hole.

Hinkle didn’t know how well Bridgeman had played until the final hole. “I had no idea what anyone in front of me was shooting. Someone told me as I got ready to tee off on number 18,” he said. 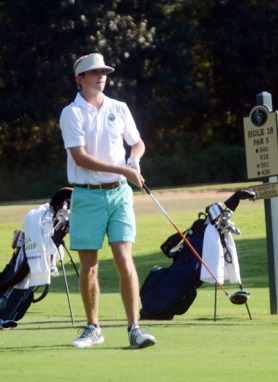 Jacob Bridgeman shot a final round 7-under 65 to finish one shot behind Hinkle.

With a one shot lead Hinkle knew a par would win the tournament. His second shot landed about 30 feet from the pin. He needed three putts to finish the hole and make the par that gave him a one shot win.

“This win shows me that my game is getting back in shape. I’ve gone the entire year not playing the way I wanted to, but this gets me back on track,” he said.

Hinkle shot rounds of 71 and 67 for a 6-under par 138 total. Bridgeman and Alex Goff of Kings Mountain each shot a 65 in the final round to post the lowest rounds in the event.

Bridgeman finished in second with a 139 total while Goff finished third with a 140 total. Gaffney golfers Zack Gordon and Seth Taylor finished fourth and fifth respectively.

The rest of the top-10 included, sixth Rhett Merritt from Easley, seventh Trent Phillips from Boiling Springs and eighth Nathan Franks from Roebuck.

Nathan Franks of Roebuck won the Sub-Junior boys division with Garrett Cooper of Cowpens was one shot behind in second place.

The boys Pee-Wee title was claimed by Roman Mullinax of Lexington.

Elle Johnson and Beth Ann Townsend of Greenville started the final round in a tie. The two golfers opened the tournament with 2-under par rounds of 70.

In the second round Johnson used her length off the tee to card an eagle on the fourth hole, a drivable par 4.

“I got off to a rough start, but making the eagle was great,” said Johnson. “I was able to drive the green and made a good putt,” she said.

Madison Isaacson of Greensboro moved past both Johnson and Townsend to hold the lead on the closing holes. The Inman golfer made a birdie on number 16 to pull within a shot of the leader.

On the final hole, Johnson made a par while Isaacson suffered a bogey forcing the two into a playoff.

Johnson was able to par the playoff hole and claim the victory.  It was her second important win in the last two months. In August she won the Beth Daniel Azalea tournament in Charleston.

“I’ve been able to put a couple of good tournaments together. I hit a lot of good drives and made some putts. I played well and was glad to get into the playoff and to win,” said Johnson.

Townsend finished in third place while Kerri Kenkel of Charlotte was fourth in the girls division. 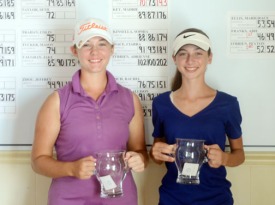 Rachel Rich and Abigayle Hatcher finished on top of the Girls Sub-Division.

Rachel Rich of Mt Pleasant finished ahead of Abigayle Hatcher of Roebuck to win the girls Sub-Junior title.