The Furman golf course will play a little over 7,000 yards for the Web,com golfers.

The BMW Charity Pro-Am presented by Synnex will be played at the Furman University golf course this year. The course on the Furman campus will join Thornblade Club and The Preserve at Verdae as hosts for this year’s event.

The addition of the Furman golf course pulls the BMW tourney together geographically. After playing courses from Asheville to Spartanburg to the far western part of South Carolina this year’s courses are about a $10 Uber ride from each other.

“That was one of the driving forces for adding Furman to the tournament,” said Marshall Bettendorf, the tournament director. “In the history of the event we have always had to drive one hour and ten minutes away. We throw great parties during the week and with all the driving the golfers were too tired to take advantage of it,” he said.

The Furman golf course is no stranger to hosting a major pro-am event. The Lady Paladin LPGA Pro-Am was a major fund raiser for the golf program at the school. The event was developed by Furman’s LPGA Hall of Fame golfers Beth Daniel and Betsy King and featured LPGA stars playing with amateurs.

Since the end of the event Furman has not hosted a major event like the Pro-Am. The course, however, has been the home for a pair of major college tournaments, the South Carolina AAAAA High School championship and a number of SCGA and CGA qualifying tournaments. 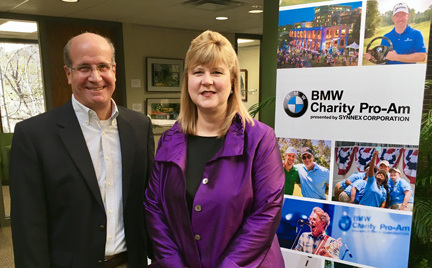 One of the concerns voiced by the private clubs that have taken part in the tournament over the years was that they did not realize enough benefit from the association. Since the clubs were private they could not take in outside golfers that might have seen the event on TV and been interested in playing the course.

The clubs also had to contend with memberships that were not thrilled to give up their course for a week or more at the best time of the year to play golf in the Upstate.

As a semi-private facility, that accepts outside play, Furman believes it can receive a direct benefit from the exposure it receives on TV and in the region.

“Sometimes we are asked to do things that just don’t make sense, but this is so obvious. We want to be seen in the community as a colabrative partner,” said Davis.

PGA Tour veteran Brad Faxon has the course record shooting a 10-under par 62 while he was in school at Furman.

The course will play about 7,000 yards for the Web.com professionals. The original course record was set by PGA Tour star Brad Faxon when he was in college at the school. Faxon shot a 10-under 62.

Since the course was rebuilt in 2008 there is a ‘new course’ record. Several golfers have posted 64s so the Tour players coming to Furman will have something to shoot at.

The three courses this year will provide an interesting challenge for the Web.com players. Each course will have a different turf on the greens.

Thornblade has bent grass, The Preserve has Mini-Verde and the golfers playing at Furman will putt on a Champion UltraDwarf Bermuda surface. It could make things a little more difficult for the professionals.

“The Tour wants them to get used to how difficult things can be. They want them to face difficult conditions and learn how to overcome. At the end of the day on Tour you got to post a score no matter what the greens are like,” said Bettendorf.

The course has been rated as one of the top courses in the state you can play by the South Carolina golf ratings panel. It has also been ranked in the top-20 courses on college campuses and has a 3.5 star rating from Golf Digest.

Furman will hosts tournament rounds on Thursday, Friday and Saturday. The final round will be played at Thornblade.

Furman will host rounds on Thursday, Friday and Saturday with the final round being played at Thornblade Club as usual.

“Both Thornblade Club and The Preserve at Verdae were wonderful hosts last year. We are excited to be working with them again and know The Furman University Golf Club will be a great addition for out players and the fans,” said Bob Nitto the president of the BMW Charity Pro-Am.

The tournament will be played May 18 to 21st. The tournament organizing group, South Carolina Charities has contributed over $12 million since it began to use this format in 2001.