Phillips is the SCJGA Player of the Year 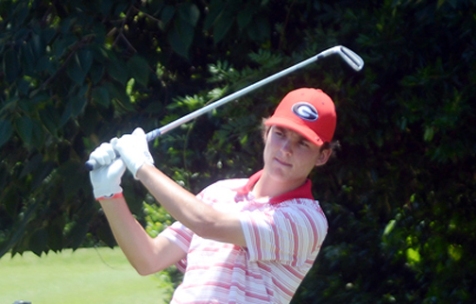 Trent Phillips finished a great season the same way he ended last year by receiving the Jay Haas SCJGA Junior Player of the Year award. Phillips received the award from PGA and Champions Tour star Jay Haas in a ceremony at Thornblade Club in Greenville.

“It is nice to win this again and be back here again with Mr Haas,” said the SCJGA Player of the Year. “You don’t think about winning an award like this during the year, but at the end of the season it is great to win this award again,” he said.

Phillips became the third golfer in the 22 year history of the award to earn the Player of the Year honors back to back. Kyle Thompson of Easley won the first two honors in 1995 and 1996. Cody Proveaux of Leesville received the honor in 2010 and 2011.

Champions Tour star Jay Haas presented the SCJGA Player of the Year award to Phillips for the second straight year.

“You look at Jordan Spieth, Rory McIlroy are in their early 20s,” said Haas. “There are a lot of great players in their 30s, but it is a young man’s game and that could be just a few years ahead in your future,” said the USA’s past President’s Cup captain and Thornblade Club member.

Phillips (l) and Jacob Bridgeman (r) battled all year for the top spot in the Player of the Year ranking.

The Boiling Springs golfer and his good friend Jacob Bridgeman from Inman battled all year for the top spot in the Heritage Classic Foundation Junior Rankings. The two future college golfers won just about everything during the last year.

Phillips gained an edge in the fall with a come from behind victory in the prestigious Bobby Chapman Junior and then followed that title up with wins in the Fall Challenge and Players Championship. The string of three wins gave Phillips a season title of 2,375.6 points while Bridgeman finished with 2,195 points.

The Boiling Springs High School junior made a habit of playing his best golf in the final round of tournaments. Phillips shot a final round 8-under par 64 at the Chapman to come from four-shots off the pace to win the title at The Country Club of Spartanburg.

He trailed by four-shots again at the Fall Challenge before posting a 5-under par 67 in the final round to win the championship by 4-shots. Phillips made up a three-shot deficit at The Players Championship and finished with a 4-under par 68 to win at Hartsville.

Phillips became the youngest winner in the history of the 40 year old Palmetto Amateur in Aiken.

In addition to the three wins at the end of the season Phillips stepped up a level to compete in the Palmetto Amateur in Aiken. He became the youngest player to win the nationally recognized amateur championship against a field of college players and career amateurs.

“I think that was the best I played because I had all four rounds in the 60s and that was something I really wanted to do,” he said.

Earlier in the summer the future Georgia golfer rallied from six-shots down to win his first SCGA Junior Championship. Phillips shot a final round 68 to win the state junior title by two shots.

Phillips shot a final round 8-under par 64 to win the Bobby Chapman Junior.

“There are still a lot of tournaments I would like to do better in and win. I’d like to play well enough this year to have a chance to be back here next year,” concluded Phillips.