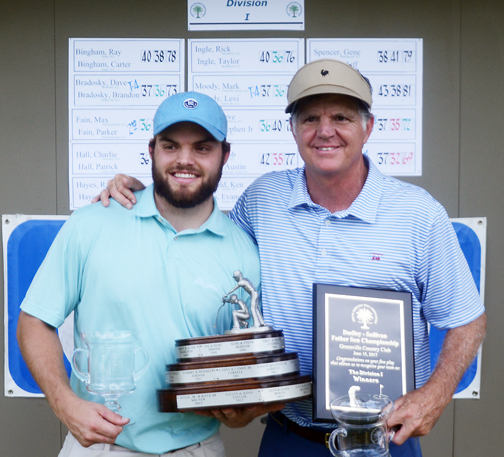 The Todds from Laurens won a second straight SCGA Dudley-Sullivan Father & Son championship. However, this year it was a different son with their father.

Walter and Neal Todd defended the title and claimed the third Father-Son championship for the family.

The Todds shot a 3-under par 69 in the alternate shot competition played at the Greenville Country Club’s Chanticleer course.

Last year it was Walter with son Walt that won the title. This year dad was joined by son Neal to keep the trophy in the family.

“We alternate years with the boys,” he said. “One year I will play with Walt in the SCGA tournament and Neal in the CGA Father-Son,” said the senior Todd.

Until this year Neal and his dad could only get close to a win with several second place finishes.

“We have been pretty close several times when we played together,” said Neal. “We just seemed to miss out or come up a shot short,” he said.

This year the team of Neal and Walter started the tournament with a bogey on the first hole and didn’t get back to even until the turn.

“Playing alternate shot is pretty hard. We thought we had it going for awhile on the back nine, but then we had a bogey on number 12 and we were back to even again,” said Walter Todd.

The team birdied the 15th hole to get back to 1-under par and then finished with a flurry carding a pair of tap in birdies on the final two holes at Chanticleer.

On the 17th hole the team needed a three footer to go to two under par and on number 18 they got even closer needing just a short two-footer to get to three under par 69 for the tournament.

The team of Max and Parker Fain had a chance to catch the Todds, but a birdie try on the final hole missed and the Spartanburg golfers finished in second place.

Jake and Bob Thompson from Greenville finished at even par for third place in the First Division Flight.

Tom and Jack Roberts tied with Wiley Bryant and Joseph Bryant for the top spot in Divison IV while Stephen and Richard Anaclerio won the Division V title.

The tournament is named for two Hall of Fame golfers from the Greenville Country Club Charles Dudley and Heyward Sullivan.