Furman golfer Reona Hirai shot a final round 1-under par 71 to win the WSCGA Amateur at Thornblade Club.

Spartanburg High School golfer Anna Morgan shot the low round of the tournament. She finished second, one shot behind Hirai.

Furman University golfer Reona Hirai is far from an old veteran on the golf course.

Hirai is just a rising senior, but she is already looking over her shoulder at some very talented younger golfers who have been competing against her this summer.

“It is amazing at how good a lot of the younger junior golfers are,” said the Lady Paladin golfer from Summerville.

Hirai came from 4-shots behind second round leader Anna Morgan to win the WSCGA amateur at Thornblade Club in Greer.

The Furman golfer birdied the final hole to earn a 1-shot victory over Morgan, who is just like  one of the young juniors she had first noticed at the CGA Women’s Four-Ball championship last month.

“I met a 13 year old at the Carolinas Women who was phenomenal. The competition is getting harder,” said Hirai.

The state championship saw a major influx of young golfers this year. More college players and a much larger number of juniors competed this year.

The first round was led by Anne Taylor Hough, a Virginia Tech golfer from Spartanburg. Hough shot an opening round 2-under par 70.

In the second round another golfer from Spartanburg took over the lead when Morgan shot a 3-under par 69.

She started the final round in the lead for the first time in a major championship. 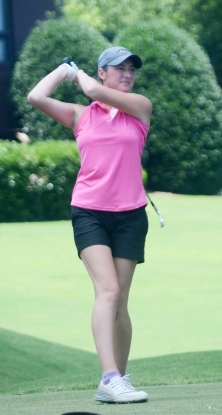 “I was a little nervous,” she said. “I just tried to take it shot by shot and not get ahead of myself,” said Morgan.

The game plan worked until Morgan hit a difficult stretch and bogeyed three straight holes. She finished the front nine in a tie with Hirai.

The two leaders finished the front nine tied at 3-over par. Even without on-course scoreboards the leaders knew what they needed to do to finish on top.

“I knew, but I tried not to think about it,” said Hirai, whose back to back bogeys on numbers 15 and 16 put Morgan back in the lead by one with two holes to play.

On the difficult par 3 17th hole Morgan’s shot stopped a long way from the hole. She would three putt the green and record a bogey to once again tie Hirai with only one hole to play.

“I had hit 16 greens the day before and putted well, but that three putt was the difference for me,” she said.

With both golfers at 3 over par for the tournament, Hirai birdied the final hole to claim the victory by a single shot. Morgan pared the hole to finish in second place.

“I just went out and played my own game. I made a lot of putts. I had four birdies on the back nine and that helped make up for some of the bogeys,” she said. 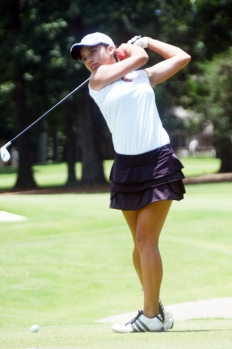 Morgan shot the low round of the tournament with her 3-under par 69 in the second round. She finished with a 219 total in her first WSCGA Amateur.

The Spartanburg High School golfer just missed claiming her second WSCGA victory. At the end of May she won the Green Valley Junior.

“This tournament will help my confidence, to lead a tournament like this has got to help me play the rest of the summer,” said Morgan.

Morgan Cox from Pickens birdied her last two holes and the James Madison University golfer finished with a 4-over par 222 total.

Phoebe Carles from Clinton was among the youngest competitors in the field. The 15-year old shot a final round 2-over par 74 to move up to fourth place.

The win by Hirai at Thornblade was her second victory at the course. Her first win came in the 2013 Blade Junior Classic as a high school golfer.

“I remembered every hole,” she joked. “I actually was in some of the same places I was today as I was when I played here in The Blade,” she said.

The victory was the second major title for Hirai in the last month. In May she had teamed up with Auburn golfer Kelly Murphy from Elgin to win the CGA Women’s Four-Ball championship.