Youth and enthusiasm won out over age and experience in the final of the CGA South Carolina Match Play championship at the Carolina Country Club. 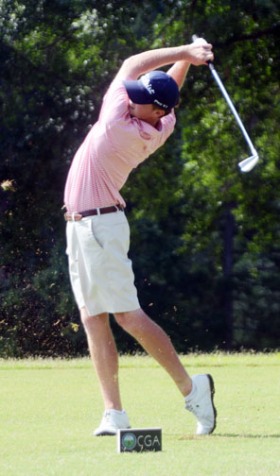 Keur took control of the final match early with three straight birdies. He didn’t show any nerves on his way to winning his first major Carolinas championship.

“I felt good about my swing and putting. I was controlling all my shots and I knew where the ball was going,” said Keur. “I think that took a lot of the nerves away,” he said.

The University of Alabama at Birmingham golfer rolled in a 40 footer for a birdie on number 7 and made a 25 footer on number 8 to save par when it looked like White would cut into his lead.

“I was just trying to get close to get a gimme,” said Keur. “To see those two go in was a huge confidence boost, it makes the hole look a lot bigger,” he joked.

White knew when the lead jumped up to three and with the way Keur was playing he could not stick to his game plan anymore.

Three-time champion Todd White fell behind early and was not able to catch up with Keur.

“Seven and eight was the swing point in the match,” said White. “I hit a bad shot on number nine and from then on I was trying to make birdies,” he said.

Keur built his lead to four up with birdies on nine and ten before White was able to cut the lead back to three.

“You think it would deflate your opponent (making putts). I didn’t think it really bothered Todd. He just kept making quality shots all the way. He made it tough,” said Keur.

The thirteenth hole would not be the hole that won the match for Keur, but it gave him an insurmountable lead.

Both golfers were in “go” position off the tee on the 519 yard par-5 hole. White had to make his decision first to either lay up or go for the green over water.

Keur coaxes one of his birdie putts into the hole during the final match of the CGA SC Match Play championship.

White chose to lay-up. After some consideration Keur chose to go for it. His 5-iron shot covered the pin from 221 yards out. He ended up 15 feet from the hole and two-putted for a birdie while White settled for a par.

“I was up three and if I missed I would still have the lead. I have confidence in my short game that even if I went in the water I could get up and down. My 5-iron distance was max, there wasn’t anything left. I felt confident and I was able to pull it off,” said Keur.

White was not able to cut into Keur’s lead on number fourteen or fifteen. The 21 year old college golfer topped the 49 year old ex Waker Cup golfer with three holes to play.

White, the Spartanburg High School golf coach, was trying to break a tie with three other golfers for the most victories in the tournament. White had won his first championship after his senior year at Furman when he was the same age as Keur is now.

“I’m going to be happy that I was the medalist, but it is frustrating to miss a chance to win. You have to give him credit he played very well,” said the match play runner-up.

On the scorecard Keur would have been four-under par when the match ended while White would have finished even.

R.J. Keur won his first major CGA Championship with his win at the Carolina Country Club.

“I love match play and to experience what it take to win a tournament you have to hit a lot of really good shots. I feel if I keep working on my game this will be a stepping stone for the rest of my summer,” said the 2017 champion.