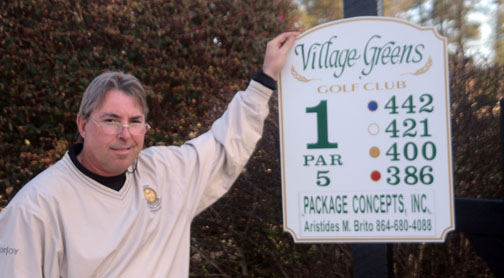 Corey McEwen is a golf professional, not a professional golfer. The difference between the two may not seem like much to most people, but among PGA Professionals there is a world of difference.

“I have a job and I work a schedule,” said the head professional at Village Greens in Campobello. “I maybe get to play once a week. The rest of the time I am working in the shop, running tournaments or giving lessons,” he said.

McEwen was able to juggle his schedule and get away from the shop for a couple of days and made the best of a rare playing opportunity. He finished fourth in the Carolinas Senior PGA championship.

McEwen shot rounds of 74 and 69 for a 1-under par 143 total. His second round 69 tied for the second lowest round of the tournament. He was the highest finisher among South Carolina professionals in the tournament.

Neal Lancaster won the tournament. The Smithfields, NC professional has played on all three  professional tours and won the 1994 Byron Nelson Classic.

“I  think I did alright being able to hang in there with a former tour player. I don’t get to play as much as he does so being able to finish in the top-five is a pretty big deal for a working pro like myself,”  he said.

McEwen now advances to the PGA Professional Championship to be held starting on September 28th at Desert Mountain in Scottsdale, AZ.

“Most of the guys who qualified from the Carolinas either are PGA Life Members, who don’t have to work a job, or are instructors. A couple just play golf all the time. I’m pretty satisfied to be a working pro who made it ,” he said.

“I don’t want to get ahead of myself. This is a big deal for me to make this tournament and play in an event with professionals from all over the country. There may be around 200 players there and I think it is going to be a great experience,” he said.

McEwen is hoping that he can juggle his work schedule again to be able to get the time off to go to Arizona for the tournament. He also hopes he can find some time to do a little more practice.

“I think for something like this we will be able to work things out. The owners are very supportive and I’m looking forward to representing Village Greens and the real working club pros at the tournament,” concluded McEwen.