Driving, Chipping and Putting to The Masters

Over 150 boys and girls competed in the PGA Drive, Chip and Putt contest at Willow Creek.

At one time or another just about every golfer imagines what it would be like putting out on the 18th at Augusta National to win the Masters.

About 80 young golfers from all over the country will get the chance to make a putt on the famed final hole next spring when the regional winners of the PGA’s Drive, Chip and Putt contest compete in the finals of the national championship.

“Most golfers get excited just to go see the Master, but the kids who win their way to play are bouncing off the walls with excitement,” said Chris Gaines, the manager of Foundation Operations for the Carolinas PGA Section.

The top finishers at Willow Creek advance to the sub-regional at Fort Jackson in Columbia.

The competition for young golfers from age 7 to 15 is a cooperative collaboration between the PGA, the USGA and The Masters.

Young golfers begin at local qualifiers like the one held at Willow Creek. The top golfers advance to a sub regional in Columbia.

The best golfers advance to the next round at Pinehurst and the top qualifiers go to Augusta the week before The Masters.

The PGA Reach Carolinas Foundation organizes the contest in North and South Carolina. The Drive, Chip and Putt competition and the PGA Junior League are structured to develop young golfers and grow the game.

The PGA Drive, Chip and Putt contest is designed to grow the game among young golfers.

The two playing programs are designed to create opportunities for kids to have fun and create an inclusive opportunity to enjoy the game of golf.

The Foundation also has two other important missions.

PGA HOPE (Helping Our Patriots Everywhere) is an adaptive golf program offered by  PGA Professionals as a rehabilitation tool to improve our military veterans’ quality of life by enhancing their mental, social, physical, and emotional well-being.

The third leg of the Foundation is devoted to diversity and inclusion through the PGA Works program. Golf in schools and mentoring programs to the underprivileged are supported by PGA Professionals in the Carolinas.

“The Drive, Chip and Putt competition and the PGA Hope program are conducted by our members at their courses. It is a way for the PGA and PGA Professionals to show support for the local communities,” said Gaines.

At Willow Creek over 150 young golfers tested their skill. Golfers hit drives for distance and accuracy. They chipped from the fringe to a pin and finally tried to sink three putts of various lengths.

“These kids are the future of the game,” said Steve Goforth, the head PGA Professional at Willow Creek. “The PGA is all about growing the game and getting kids interested so they grow up playing golf and keep playing and enjoying the game all their lives,” he added.

Golfers came from both Carolinas and Tennessee to compete in the local qualifying event.

“There is no charge for the golfer. They can sign up online. If they missed the event at Willow Creek they can go to our website at www.carolinas.pga.com/drivechipputt and find another qualifier. They can go anywhere in the country that has an opening,” said Gaines.

Logan Hawkins from Williamston was the top boys finisher in the 14-15 year old division. Maddox Whittington of Lenoir, NC was second. Both golfers advance to the sub-regional.

Logan Hawkins from Williamston was the overall winner in the boys 14-15 year old division. He had the best putting score and second best score in the chipping competition.

The Palmetto High School golfer who plays at Saluda Valley will next compete at Fort Jackson with the hope of advancing to the regional in Pinehurst.

“This is my first time trying this,” he said. “It would be pretty great if I could play at Augusta in the finals,” said Hawkins.

While some of the contestants limited their practice to the event format, Hawkins just played his regular game to get ready.

“I guess I might have paid a little more attention to some things, but I just played the way I usually do before this,” he said. 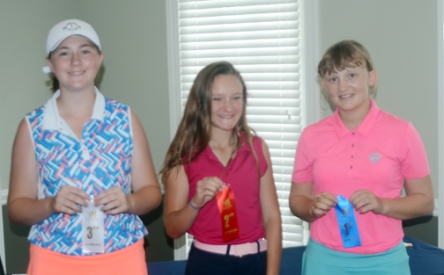 Chloe Crane, Madilyn Newman and Nicole Adam all advanced from the contest at Willow Creek.

The top three girls in the 14-15 year old division showed how far young golfers will travel to get a chance to compete.

Newman won the putting contest in the finals at Augusta last year. The Knox Central high school golfer would like nothing better then to be on the 18th green again this year.

“I thought I might be nervous with all the people around, but they just kind of became a blur. I will remember it forever and hope I can get back there again,” she said.

Those are the same sentiments of just about every golfer of any age when it comes to The Masters.

Complete results from Willow Creek are available at