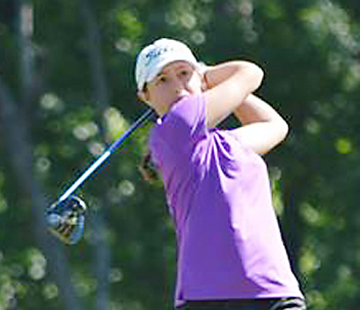 Gracyn Burgess of Lexington shot her second straight 71 to hold a three shot lead going into the final round of the WSCGA Junior. (CGA Photo)

Gracyn Burgess shot a second straight round of 1-under par 71 to keep the lead at the WSCGA Junior championship being played at Wescott Plantation in Summerville.

The rising senior and future Clemson golfer now has a three shot lead with the final round coming up on Friday morning.

Burgess’s lead is over one of her high school teammates at Lexington High School. Isabella Rawl shot the best round of the day.

Rawl carded a 3-under par 69 to move up to second.

Rock Hill’s Jodee Tindal is in third place at 146 after shooting a second round even par 72.

Defending champion Baylee Evans of Lancaster is in fourth place at 147.

Anna Morgan from Spartanburg is among four golfer tied for fifth place after 36 holes.

Four golfers are tied for fifth including the runner-up in the WSCGA Amateur championship.

Anna Morgan of Spartanburg shot an even par 72 to finish the first 36 holes at 149.

Joined in fifth place with Morgan are Elle Johnson of Inman, Katie Whitfield of Clemson and Rachel Rich of Mount Pleasant.

The final round will begin with a shotgun start at 9 AM on Friday morning.

Complete scoring is available at http://www.wscga.org.